Blackjack card counting: it’s something you’ve probably heard of before, but also something you probably don’t understand too well. It’s found in many different movies and talked about in a multitude of different books, and can lead to some players walking away with huge amounts of money – and others thrown out of the casino rather unceremoniously.

So, on this page you’ll find out everything you need to know about card counting, both in land-based casinos and online, including exactly how many successful blackjack players count cards. Whether you then choose to use the techniques found on this page is entirely up to you!

What is Blackjack Card Counting?

This is perhaps the most important question of all, and the answer isn’t as simple as some might think. Firstly, blackjack card counting is not the practice of keeping tabs on every single card in the deck, as that would be impossible. Instead, card counting is the practice of using a system to evaluate the chances of a certain card being drawn next, which can then be used to evaluate how much to bet.

The basic rule to remember about blackjack is this: the more Aces and 10-value cards remaining in the deck, the more favourable it is for the player. So, card counting allows you to understand when more of these cards remain in the shoe, by understanding which cards have already been used. It is not a completely foolproof system, and doesn’t guarantee profits in the short term, however those who master card counting should find that they make a profit while playing blackjack in the long term.

Finally, and this is really important, blackjack card counting isn’t another one of these systems that claims to guarantee profits, but then fail to deliver. Card counting is a real tactic used by many successful players, and is one that is proven to work. It’s also a tactic that you won’t have to pay for in order to learn, as you’ll find all of the information you need on this page, and it is all completely free!

How to Count Cards in Blackjack 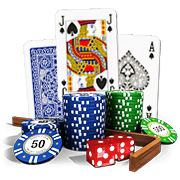 So, how exactly do you count cards in blackjack? Well, it’s actually easier than you might think, and starts with you assigning a value to each group of cards. We’ll concentrate on the most common method of card counting, which is called Hi-Lo, and the values in this system are as such:

Make sure you memorize these values properly, as they are the most important aspect to card counting. You will then keep a running count of the cards that are used during a game. So, if the first five cards you see are 5, 2, 7, 8, A, your running total will be +1 (1+1+0+0-1). You can then use your running total to determine if there is a better or worse chance than normal of a 10-A card being dealt to you in the next hand. It’s important to remember this though: when the dealer shuffles the cards and fills the shoe, you need to start your card counting all over again.

So imagine this scenario. You’re playing at a table with two other players, and the cards received by each player, as well as the dealer, are:

What would the running count be after this hand? Well, it would be -3, and this would indicate that the casino holds the advantage, as there is a higher chance of you being dealt lower cards in the next hand, thanks to the higher than average number of 10-A cards that have been seen on the table.

This system worked really well when the casino only used a single deck in blackjack, however the casino bosses soon got wise and decided to use multiple decks. Luckily for card counters though, there is an easy way to circumvent this. In order to get an accurate representation of the odds when playing using multiple decks, card counters calculate something called the True Count.

So, how do you go about getting the correct value? Well, it’s actually quite simple: you divide the total count by the remaining number of decks. So, using the previous example of having a count of +6, the True Count with three decks remaining would be +2 (+6/3=+2). It’s quite a simple answer to the problem and one that works incredibly effectively – much to the annoyance of the casinos!

How to Use the Card Counts

Card counting is a real tactic used by many successful players, and is one that is proven to work.

Now you know how to count cards, but how do you turn this knowledge into money? Well, you use the values to determine how much to vary your bet by, based on the likelihood of you being dealt higher cards in your hand.

So, if you have a high running count, it tells you that there are more than the average number of higher cards left in the pack, therefore you will want to increase your bet size, in order to take advantage of the better odds you’re being given. If, however, you have a count lower than zero, you should lower your bet, as the chances of you being dealt good cards are lower than average. It’s essentially a case of capitalising on the best odds, and mitigating any losses when the odds aren’t in your favour.

When it comes to altering your bets, you’ll need to be subtle though, as you’ll find out in the next section.

The Legality of Card Counting

Many people think that card counting is illegal, but it is not. It’s simply a way of using skill to gain an advantage over an opponent – something that is found in many other sports and games. This doesn’t mean that casinos like it though, and players who are suspected of card counting will often be ejected from the casino pretty quickly. The best place to go if you want to use card counting is New Jersey, as state laws prohibit casinos from ejecting card counters, as lawmakers don’t think that there is anything wrong with players using skill to gain an advantage.

Outside of New Jersey though, casinos have gotten wise to the practice of card counting, and have developed a number of ways to detect it. They also often use methods designed to confuse card counters, such as training dealers to deal faster, and shuffling the cards on a much more regular basis.

Card counting is something that anyone can do in a land-based casino, however it is not possible to count cards online at regular blackjack games. But why is this? Well, it’s because the hands are not part of a sequence, but are instead different hands in their own rights. This means that there’s never the chance to get a running count going, meaning that card counting is impossible. So, when playing standard online blackjack games, you simply ned to use other blackjack tactics to give yourself the best chance of winning.

The only exception to this rule is live dealer blackjack, which is a relatively new addition to the world of online blackjack. This uses a real dealer, beamed to players’ screens using a webcam, and aims to replicate the exact way blackjack is played in casinos. This is good news for card counters, as they can once again get a count going and gain an edge over the house. As with card counting in land-based casinos though, make sure you are subtle when it comes to altering your bets, as online casinos have a number of tactics in place for spotting potential card counters, and will ban those suspected of the practice.

If you think that blackjack card counting is something you could do, you’ll need to find the best online casinos offering live blackjack to their players. Luckily for you, we’ve reviewed many of the online casinos available to Canadian players, so why not take a look through our reviews right now? You can then sign up with one of our recommended sites and see if you have the skills needed to make some money counting cards when playing blackjack!