Roulette is a game based entirely on chance, and there is absolutely nothing you can do to influence where that little ball will land once the wheel stops spinning. So, how do some people manage to win more than others on a consistent basis? Well, it’s because they play smart, using a number of tactics to ensure that they have the best chance possible of winning every time they sit down at the roulette table.

But what exactly are these tactics they use, and what are the tips that will help you increase the amount of money you win when playing online roulette? You’ll find out some of them below, and just using one or two of them should see you become more successful at the roulette table straightaway!

There are three main types of roulette: American, European and French. While they follow the same basic gameplay, they all have different odds though, and the variation that offers the best odds to players is French roulette. Overall, a player can expect a house edge of just 1.35% when they play French roulette, compared to 2.7% at European roulette, and a massive 5.26% at American roulette. But why is this?

Well, firstly, unlike American roulette, there is no double zero on the wheel, which cuts the house edge considerably. This is also the case in European roulette, but the French variety has another advantage – the La Partage rule. This is only found in French roulette, and gives players half of their bet back if the ball lands on zero – providing their bet was on an even money selection. Therefore, those whose priority is making as much money as possible should choose French roulette every time.

While roulette is a game of luck, practicing will still make a huge difference to the amount of money you make. This is because the game has a number of different rules, as well as many different bet types. If you don’t understand these rules, you won’t be in the best possible position to make money when you play.

Stick to Even Money Bets

While roulette is a game of luck, practicing will still make a huge difference to the amount of money you make.

This next point might prove counter-intuitive, however it is something that all proficient roulette players will tell you – the best bets to make on the entire board are the even money bets. These even money bets are red/black, odd/even and hi/lo, and they give you the best chance of making a profit in the long term. This is because even money bets have the lowest house edge of all bets on the roulette table. Many players also like to make a couple of even money bets per turn, to further increase their chances of winning. In roulette, it’s far better to build your chip stack slowly, than keep risking your cash on a selection with low odds of spinning in.

The problem that many people have with even money bets is this though: they don’t provide the same amount of excitement as other bet types, as the amount you can win is only double your stake. If your main goal is to make money though, they are the best choice by a mile. Of course, if you simply want to have fun though, there’s nothing wrong with increasing the excitement by betting on other selections instead.

Don’t Rely on the Gambler’s Fallacy

The gambler’s fallacy is something that persuades players that a selection has a better chance of spinning in than it actually does. An example of the gambler’s fallacy would be this: the roulette wheel spins in on red three times in a row, and this makes a player believe that this means that a black number must be due to spin in next. The reality is this though: even after a thousand consecutive spins where the ball has landed on red, the chances of a specific colour spinning in next are still around 50%.

The gambler’s fallacy can be dangerous to gamblers, as it often encourages people to make reckless bets, as they believe that the odds dictate that a specific result must happen next. To avoid this, ensure you have a good knowledge of the odds, and take each spin of the reel on its own merits, without thinking about any of the preceding spins.

If you want to keep playing roulette for as long as possible, it is absolutely vital that you don’t overstretch yourself. Many new roulette players find that they lose all of their chips within minutes, simply because they get carried away and make bets that are far too large in comparison to their bankroll. Instead, they should exercise bankroll management and ensure that they always have chips left to use in their next roulette session.

Bankroll management is effectively the practice of limiting yourself when playing roulette. So, if you have a total of C$100 in your online casino account, you should only risk a small portion of this amount in a single session. In general, taking around 10% of your total amount of money to the table is about right. You must then have the self-control to only use this money, and must walk away if you find that you’ve lost the money set aside for the session. Conversely, you should also have a set amount that you want to win, and should also walk away from the table if you manage to win that amount, just to ensure that you don’t then end up losing it. 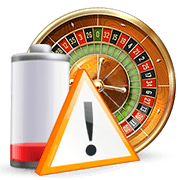 Most online roulette players sit down to the table after a long day at work, when they are generally incredibly tired. This is not a particularly good idea. The reason for this is simple: when you are tired, you are more prone to making bad decisions, and you also probably won’t have the mentality needed to see through a whole session. Not having the willingness to see through a session to its conclusion means that you’ll end up making more and more extravagant bets, often because you simply aren’t too interested in playing and want to be doing something else.

If you ever find that your concentration is wavering and that you are making bad decisions, there is only one thing to do – log out of the online casino and go and do something else. You can always come back later when you’re feeling slightly more refreshed. It is also important to say that playing roulette while drunk is also an incredibly bad idea, for the same reasons that playing while tired is a bad idea.

Accept That You Won’t Always Win

Losing is very much a part of roulette, and the way that a player handles a losing streak will play a big factor in how successful they are in the long run. There’s absolutely nothing you can do to force the ball to land in the right place, and sometimes you’ll find yourself losing bet after bet after bet. The key here is to not become discouraged, and to keep on playing until the bad streak is over. Just remember not to believe the gambler’s fallacy – just because you’ve been on a run of bad results, it doesn’t mean that your next spin will also be a bad one!

When on a bad run, some players like to lower their bets, while some players believe that they should continue betting the same amount. Some even choose to raise the amount that they stake. The path you choose is really up to you though, with none of them offering an advantage over the others.

Perhaps the most important thing to remember when playing roulette, regardless of whether you’re playing online or in a land-based casino, is that you should always enjoy yourself. If you’re not enjoying playing, you’ll never be able to make the right decisions, as you simply won’t care if your next bet is a winning or losing one.

What’s more, roulette is, above all else, supposed to be fun. So, if you are not enjoying yourself, what’s the point in playing? If you do start to find that you are not enjoying playing roulette, you should stop playing straightaway and come back later. If you still don’t enjoy the game, it could be a signal that you need to start playing a different type of game altogether.