Earning Your Keep in the Octagon

Making money is a part of being an MMA fighter, but so too is getting hit in the head. While there are superstars that make a ton of dough, there are plenty of other lower-level and amateur fighters who take a pummeling and barely make enough to cover the bills. We decided to take a look to see how much UFC fighters make to see if it really pays to become a professional combatant. 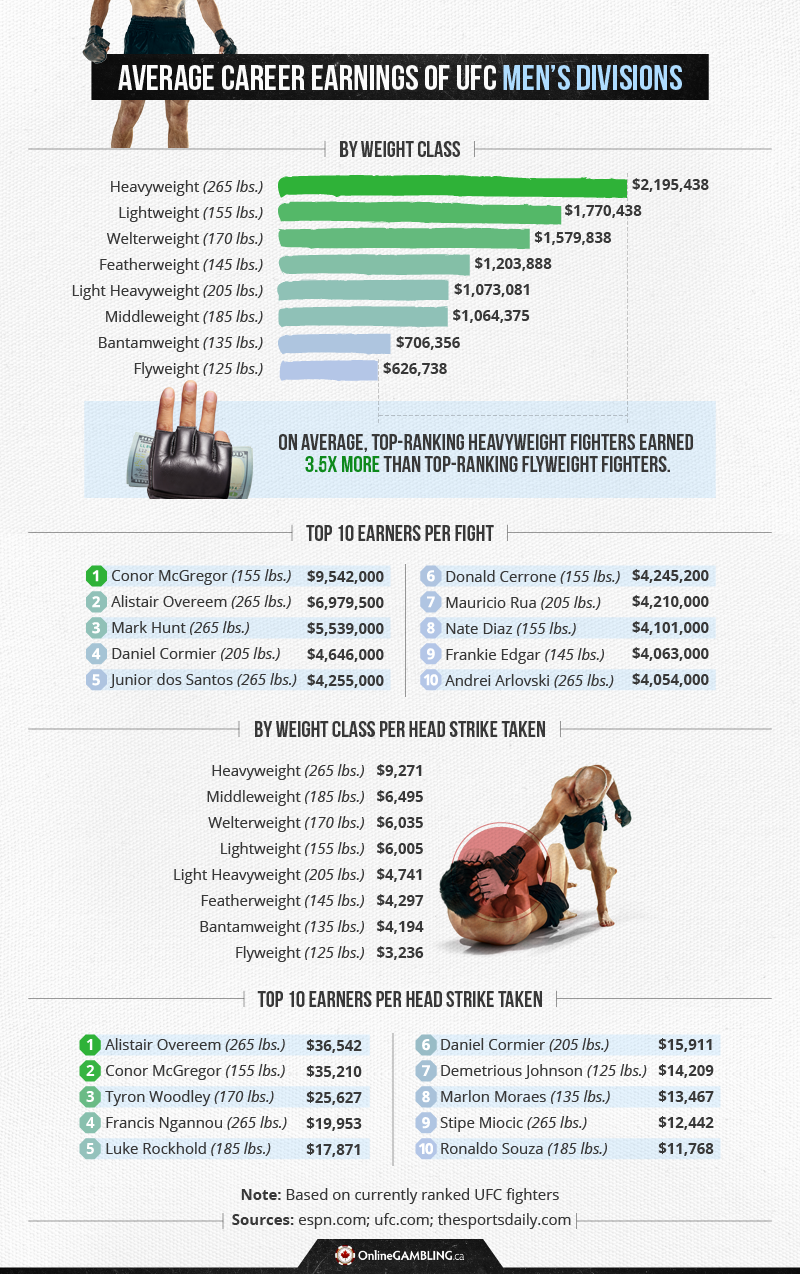 We then calculated approximately how much money each fighter earns per head punch. Overeem came out on top, netting a nice $36,542 per strike to the head, followed by McGregor, who earns $35,210 per head punch. On the other end, Jacare Souza earns $11,768 per punch to the head, which is still a decent amount of money for taking a hit in the head or face.

Taking the Most Hits for Your Money 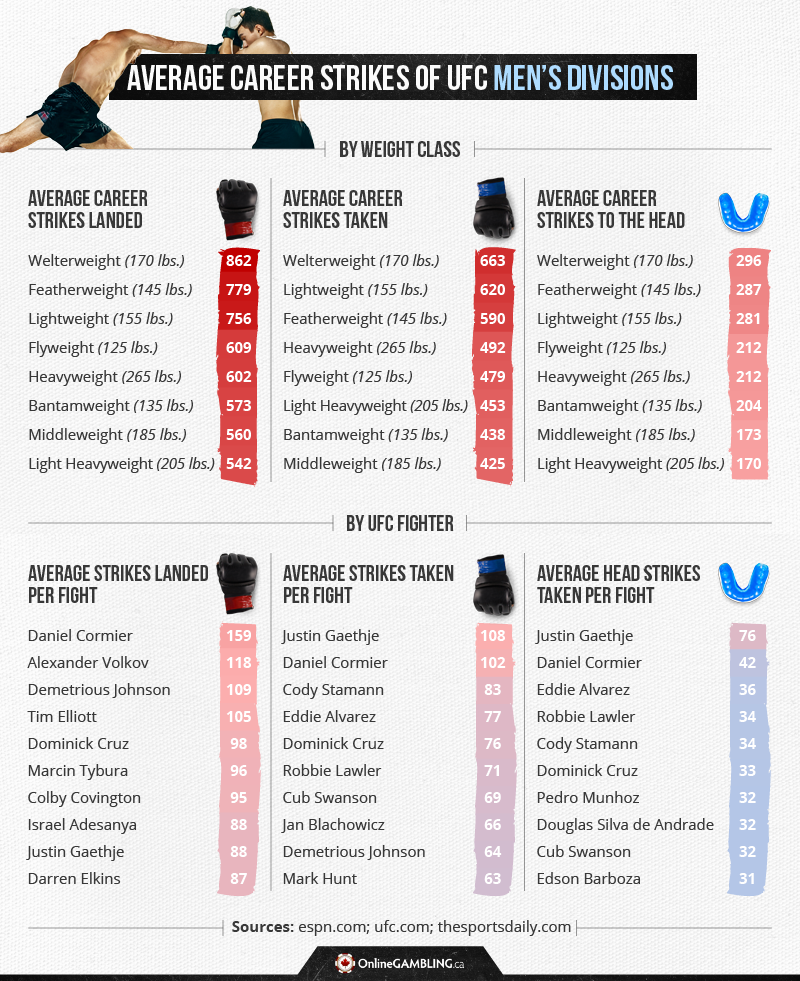 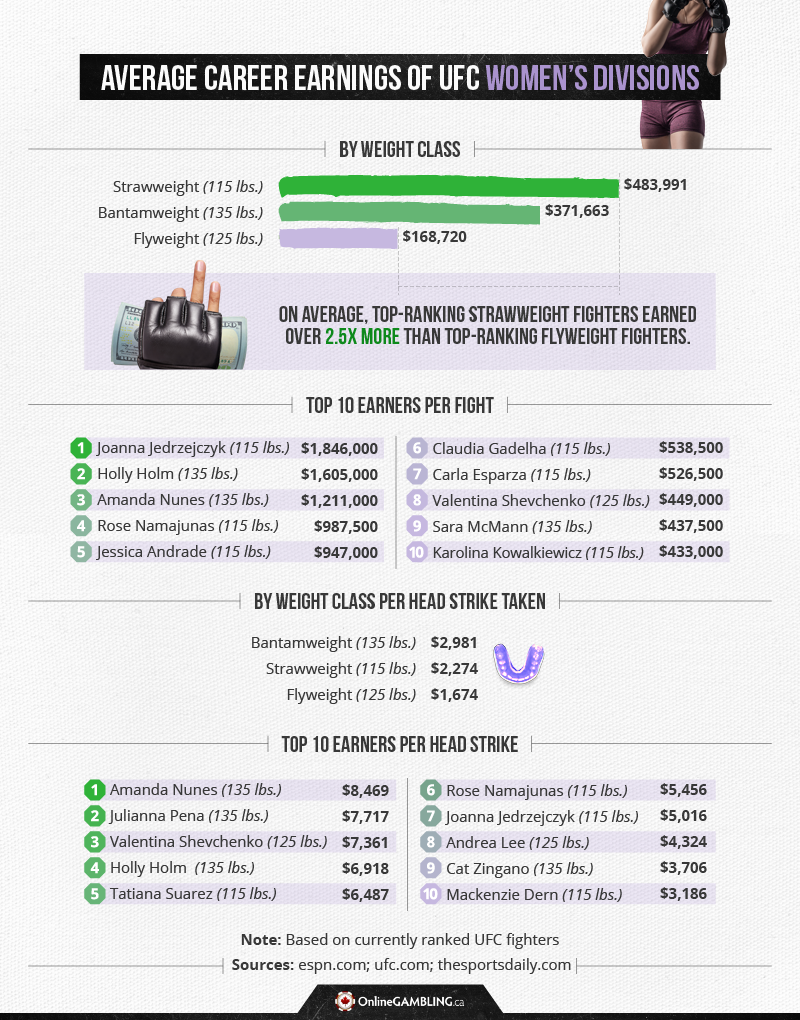 Here, we're looking at the (considerably lower) earnings of women in the UFC. Those in the strawweight class had the highest career average earnings at $483,991, while the bantamweight class earned an average of $371,663. Flyweights earned the least average career earnings at $168,720. 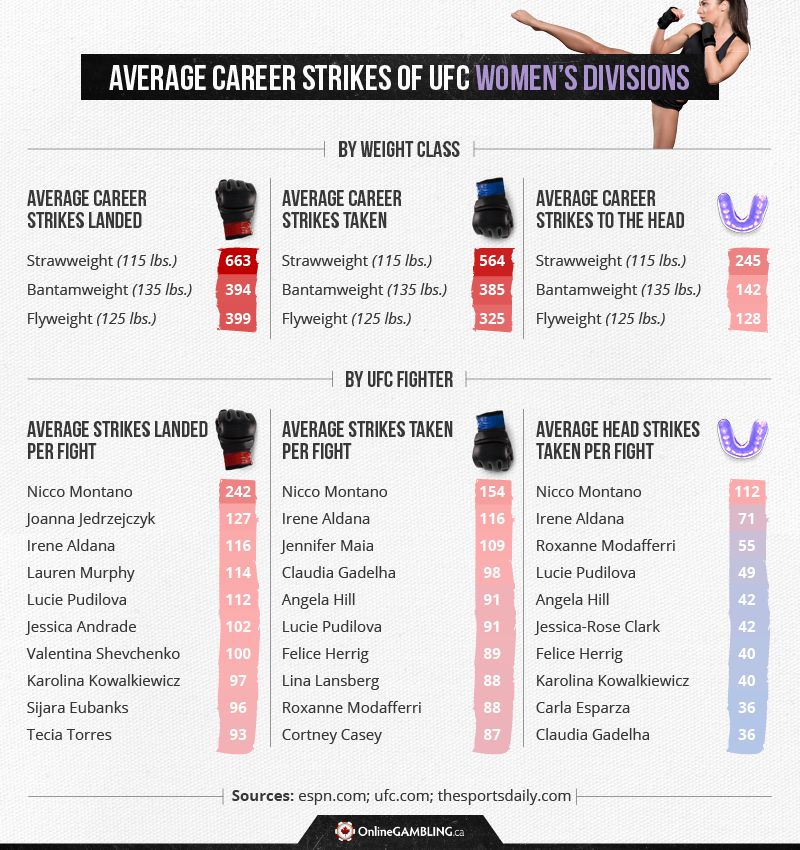 We also checked to see which individual female fighters took the most strikes. Nicco Montano, a flyweight fighter, had the highest average head strikes taken per fight at 112, which is quite a bit more than the woman who came in second (bantamweight Irene Aldana with 71). It's also roughly double what the third fighter on this list took (flyweight Roxanne Modafferi with an average of 55 per fight).

Biggest Disparities In (and Out of) the Ring 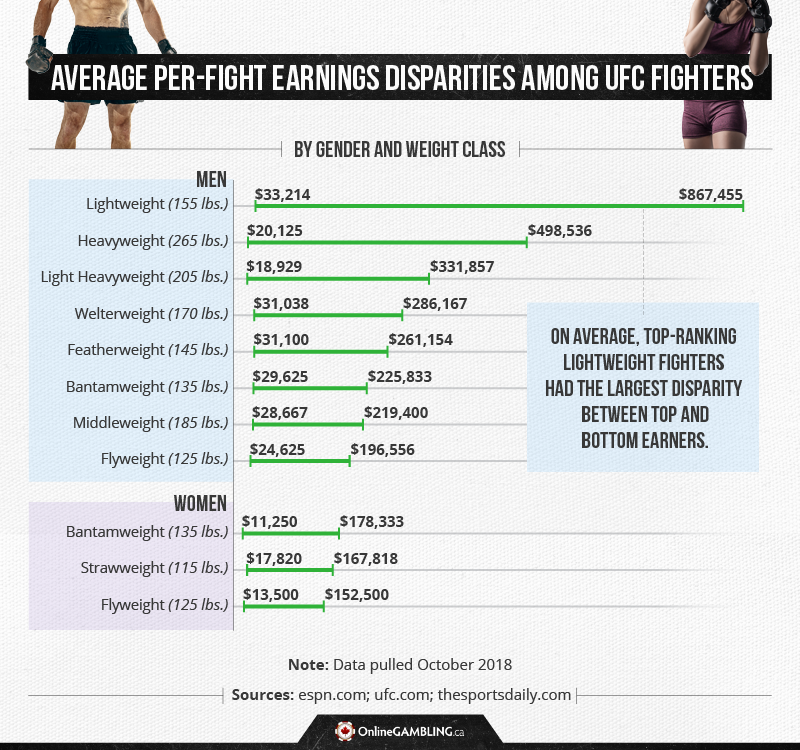 Finally, we looked to see where the biggest earnings disparities were found. The biggest difference was found among lightweight fighters, where the lowest earners earned a fraction of what their top-ranked counterparts took home – over an $830,000 difference between the two.

Getting into a sport where victory relies on repeated blows can definitely be risky. Fighters probably spend some time considering whether fighting professionally is financially worth it, especially when many of these punches land directly on the head or face. When we looked through the stats to see how much a punch to the head generated money–wise, we found that lightweights – and not heavyweights – were the ones who took the most hits. Also, women's division fighters took more head smashes than 5 out of 8 men's divisions.

It's not an easy job, and it takes a lot of skill to climb the ranks for an MMA fighter. Bigger payouts are there for fighters who are top-ranked, but the path is anything but a smooth and simple ride.

Using ufc.com, we collected the top 15 ranked fighters in each weight class. Once the list of top fighters was created, we pulled fight data from espn.com and ufc.com for the number of fights, strikes thrown, strikes taken, and strikes taken to the head. We used thesportsdaily.com to get career earnings for each fighter. For average earnings disparities, we took the number of fights each fighter had been in and divided it by their career earnings. Then, we took the top and bottom earners for each division and compared them. Fighters who had fought in multiple weight classes during their career were counted as the weight class they are currently ranked/fighting in.

Fighter earning data was pulled October 2018 and reflects money earned up to this point.

This data only reflects money earned from UFC 46 forward (2004). These figures only include reported salaries and bonuses that have been made public. Additional bonuses, pay–per–view earnings, and sponsorship dollars are not included. Official UFC Reebok sponsorship money is included from UFC 189 forward. Some commissions don't report fighter's salary info, so some earnings have been estimated based on what the fighter had earned in their other fights.

Are you keen to share this content with your followers, but you're not sure if it's A–OK? We're happy to let you know that you totally can, as long as it's for noncommercial purposes. We do have a favor to ask first, though – but don't worry, it's not a punch to the head. We just ask that you please link back to this page so that your followers can check out the full scope of our analysis.