Odds of Becoming an NHL Player

From the time they're youngsters, hundreds of thousands of rising hockey players are bombarded with motivational precepts from well-intentioned parents and coaches, such as: "Anything is possible if you work hard enough."

While the platitude serves as an inspiring motto for players to keep grinding – it's not entirely realistic.

Resilience, determination, and strength are just some of the many ingredients required to transcend into a standout hockey player, but secondary factors (like location) may double the odds of landing a spot on an NHL roster.

Check out our comparisons below to see which states, cities, and provinces increase the chances of achieving the center ice spotlight.

Raised in the Rink 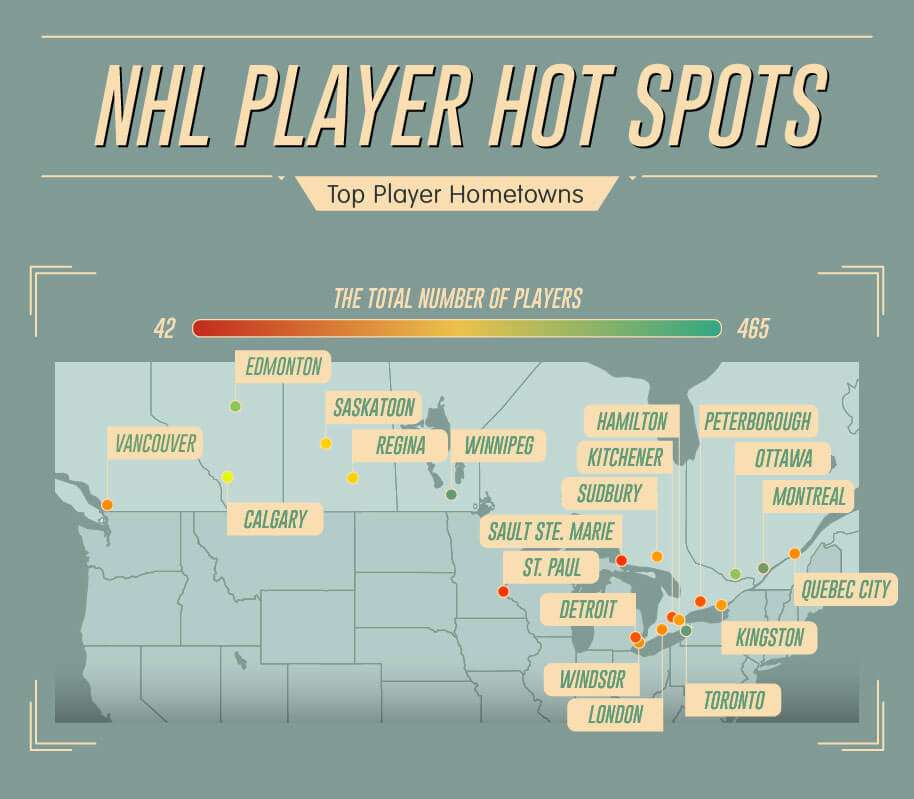 From a cultural standpoint, it's no surprise to hear that Canada embraces hockey as a lifestyle – designating the Great White North as the ideal location to produce NHL hopefuls.

If you're looking to double your chances for an entry ticket into the league, look no further than Ontario's capital – Toronto. A true reflection of Canada, Toronto is a bustling melting pot with over 140 languages spoken, a vibrant nightlife, and a knack for breeding top NHL talent. Producing a total of 465 NHL athletes, this hockey hot spot excels past any other city in North America. 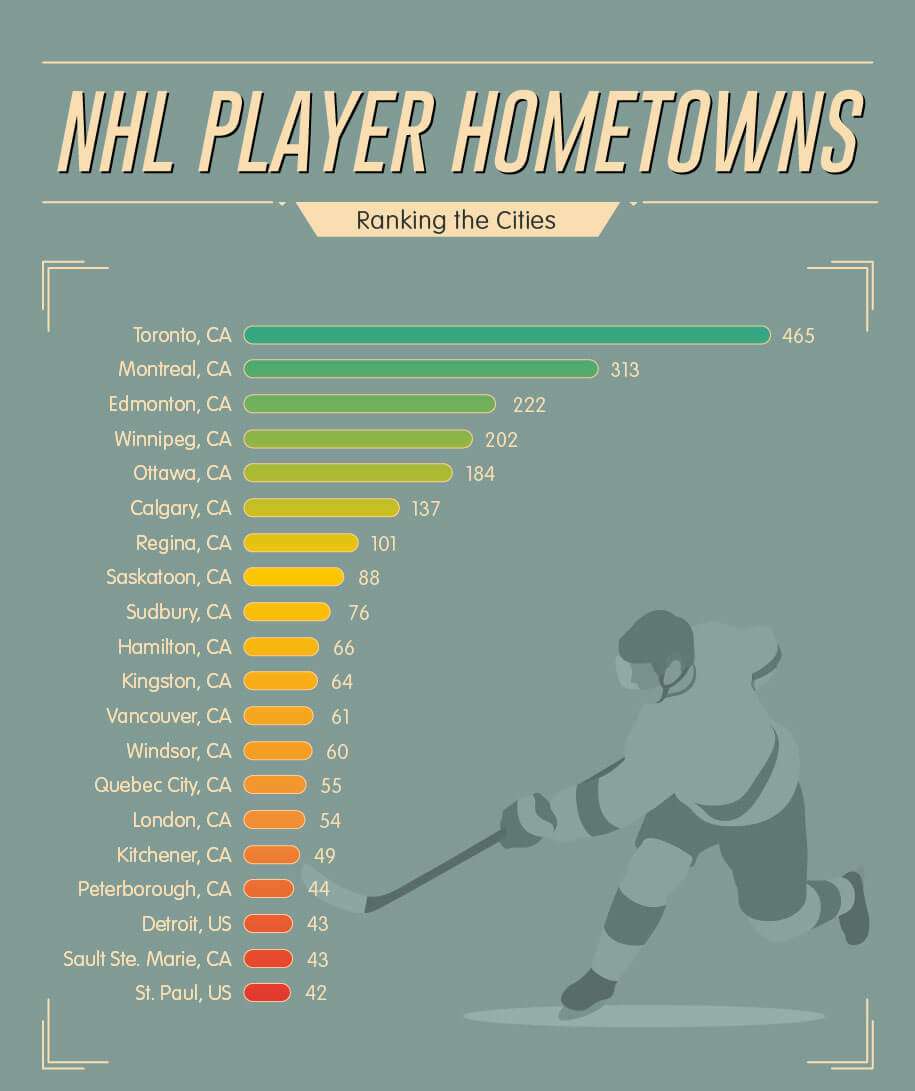 The likelihood of making it to the NHL increases if you are from urban regions such as Montreal (313 players) or Edmonton (222 players). While the winter season tends to impede other sports, hockey thrives in these cities when the ponds freeze over.

Think twice of Canadian cities Kitchener, Peterborough, Sault Ste. Marie, or Detroit and St. Paul in the U.S. – locations that have turned out fewer than 50 players. NHL hopefuls: With these kinds of figures, you may want to start prepping the moving trucks. 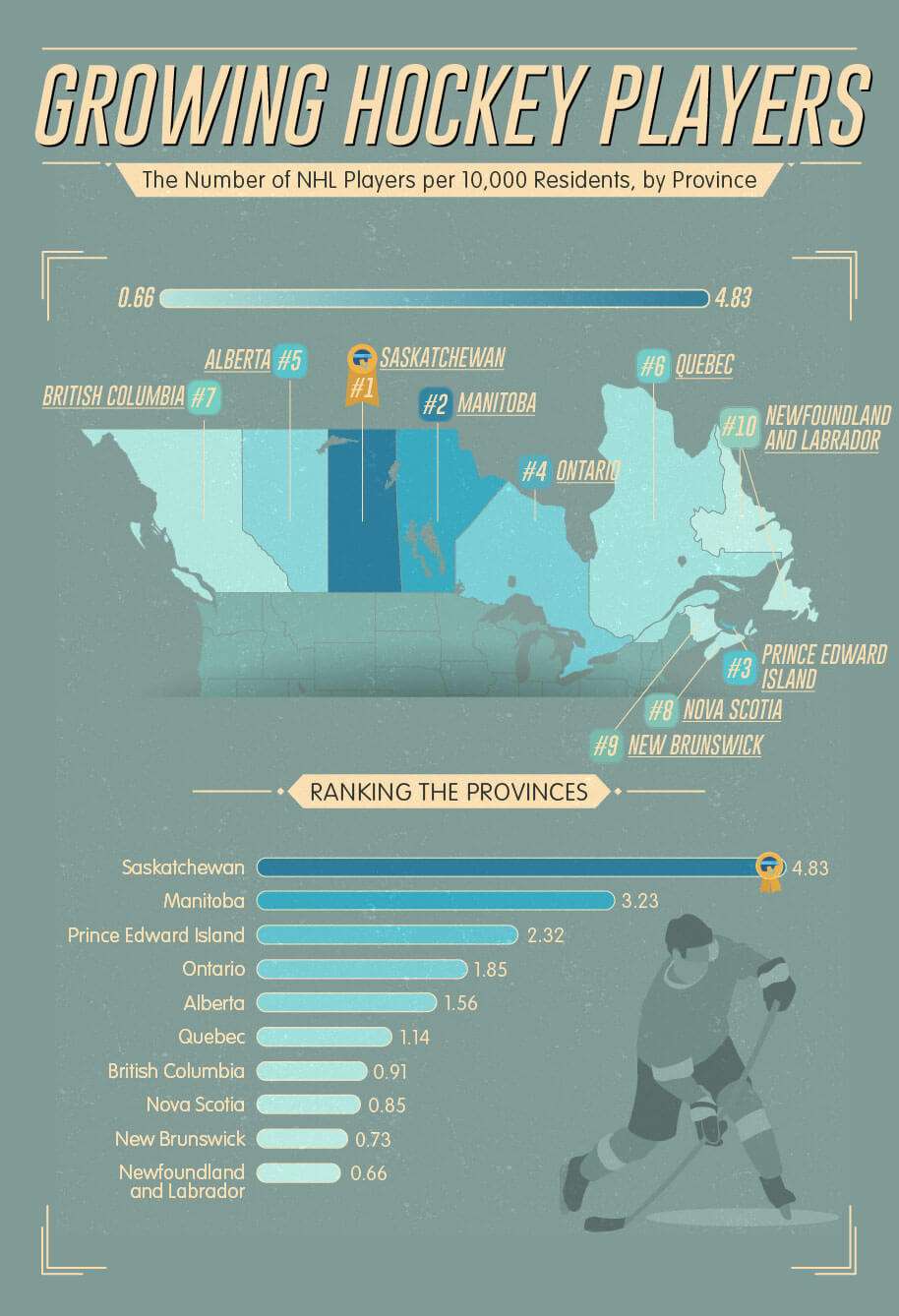 Let's face it – we're not all accustomed to global cuisines, soaring skyscrapers, and crammed metro trains, so let's dive into the odds throughout the provinces.

Saskatchewan stands tall by churning out 4.8 NHL stars per 10,000 citizens populating the province. Manitoba and Prince Edward Island both enjoy favorable odds with 3.2 and 2.3 players hailing from each region, respectively. However, the likelihood of becoming an NHL athlete is lower if you're originally from New Brunswick, Nova Scotia, or Newfoundland and Labrador.

The Future of NHL Talent

Let's call a timeout quickly. Realistically speaking, the odds of making it as an NHL player are relatively slim. And while landing a roster spot is certainly a long shot, the odds can be improved based on one's hometown.

As our findings indicate, location appears to play a role in securing a career as a professional hockey player. Canada truly dominates the United States when it comes to churning out top talent for the national sport. If you're looking to find the future of the NHL, head on up to Toronto, Montreal, or Edmonton in the Great White North.

Player hometowns gathered from hockey-reference.com. Population data based on information from the United States and Canadian Census programs.

Like what you see? If you're interested in covering this project for noncommercial purposes, we encourage you to use any of the graphics included above. Be a team player by featuring OnlineGambling.ca in your report and provide a link back to this page so other fans can learn more about our work.