Odds of Becoming an MLB Player

MLB players all have one thing in common – they've worked extremely hard to get to the pros. They may have also spent time in the minors before reaching the bigs, because in addition to the 30 major league teams, each team has a handful of minor league teams, where players spend time (sometimes, many years), working their way up to their MLB debut.

Don't forget, the MLB draft is huge – 40 rounds with 30 or so selections each – with most of these players finding their way through their team's expansive farm system, hoping to see the big day when they get called up.

Numbers aside, it's still no easy task to get into the majors. We decided to look into the locations MLB players most call home to see if the odds of making it into the big leagues are as much about talent as they are about being in the right place at the right time. Continue reading to see what we discovered. 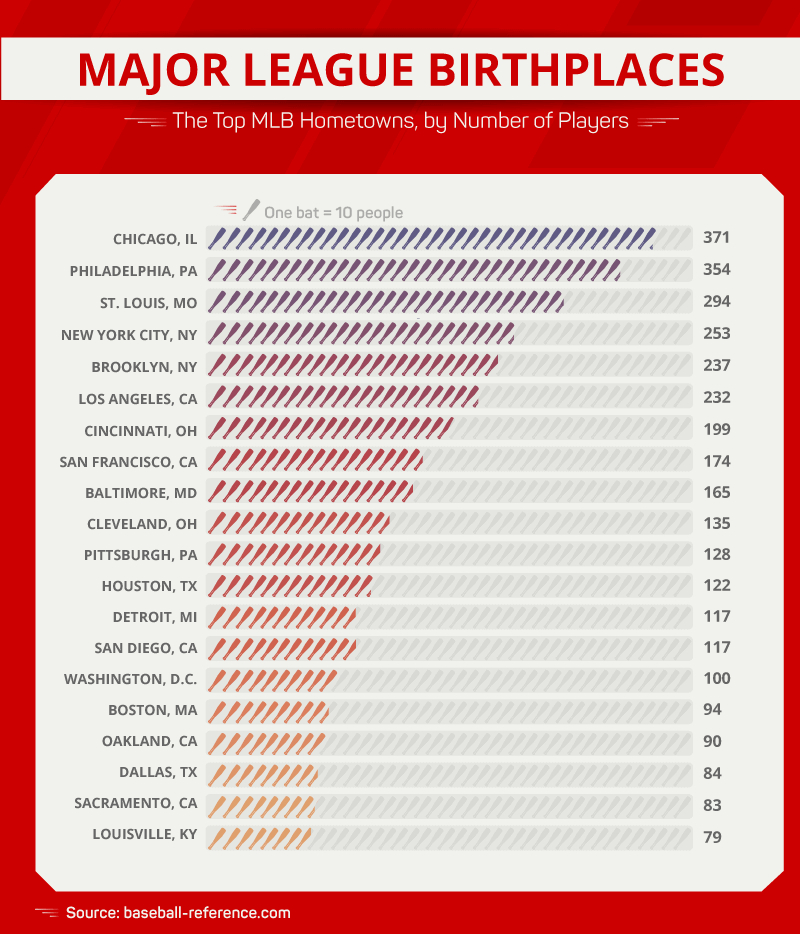 While many MLB players were born outside of the U.S. (in 2017, this number was 259 on opening day or nearly 30%), the odds still favor those born in the U.S. making it to the majors. Of these players, 371 hail from Chicago, Illinois. Chi-Town, of course, is home to both the Cubs and White Sox, who have undoubtedly inspired many locals to pick up a bat and glove over the years. Philadelphia, Pennsylvania, comes in second with 354 players calling it home. In addition to the Philadelphia Phillies, it's also home to Temple University, which ended its baseball program in 2014.

Recently named the town with “the best fans in baseball,” perhaps it shouldn't come as a surprise that St. Louis, Missouri, is the third-ranked city on this list. It boasts one of the most iconic teams in baseball with the St. Louis Cardinals, and the Gateway Arch majestically gracing the backdrop of the Busch Stadium has been a symbol of baseball in the heartland for years.

MLB Players on the Compass 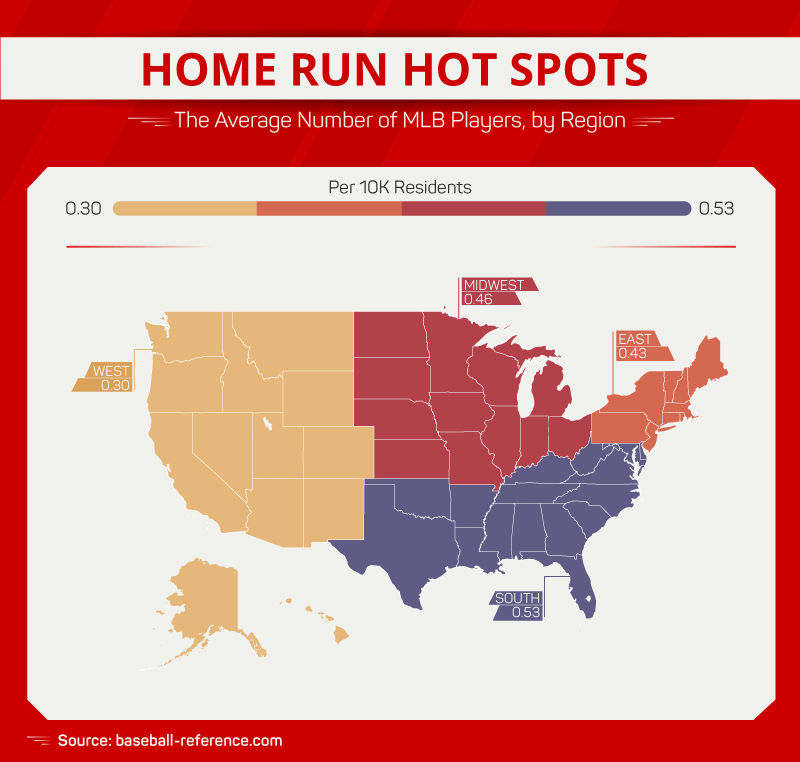 If you look at the U.S. by region, a couple of areas come out on top when it comes to the MLB. First, the South sports the most baseball players per 10,000 residents, followed by the Midwest. The East comes in third, and the West ranks fourth.

Some cities in the South that have been home to the most MLB players include Houston and Dallas, Texas, and Louisville, Kentucky, home of the iconic Louisville Slugger.

In the South, the long summers and mild winters help keep baseball a year-round sport, which may be a part of the reason why it produces so many MLB players.

From Sea to Shining Sea 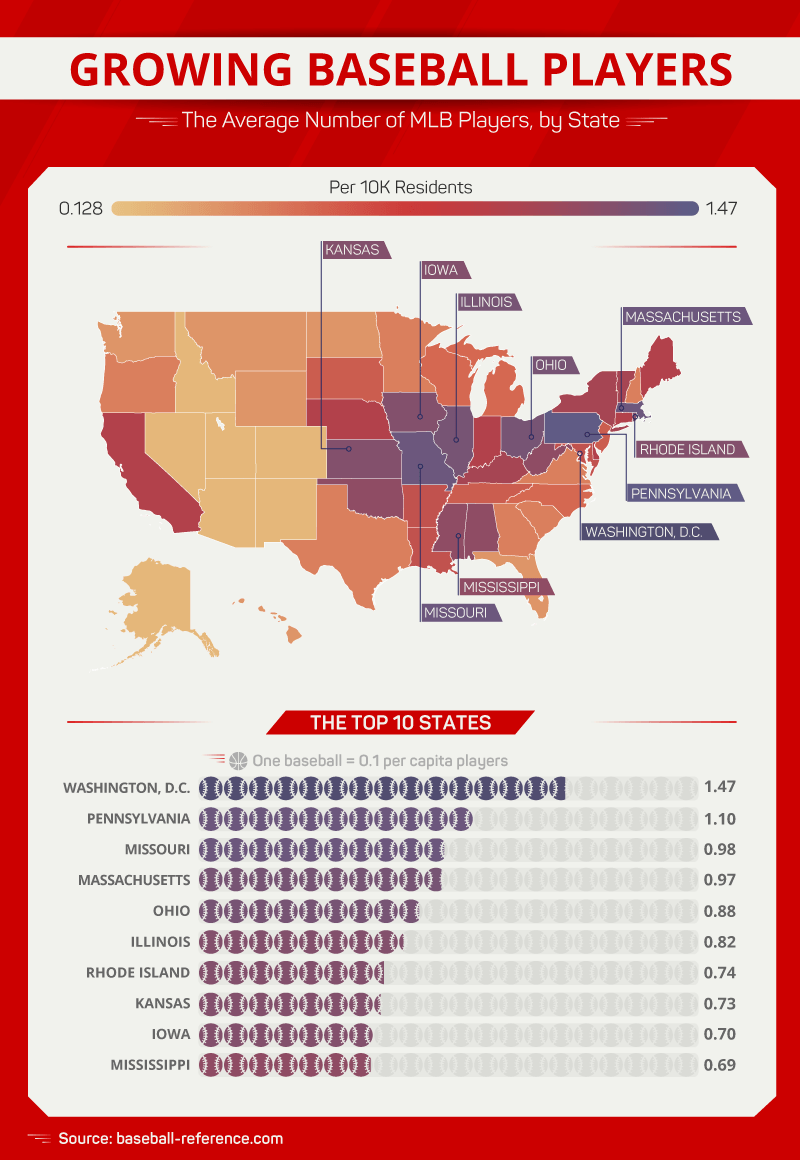 When looking at the stats state by state, it's interesting to note Washington, D.C., comes out on top for producing the most MLB players per 10,000 residents. Since so many players hail from there, perhaps it shouldn't come as a surprise that the MLB returned to the nation's capital after a 33-year hiatus. In 2005, the Washington Nationals made their debut at RFK Stadium before eventually shifting over to the new state-of-the-art Nationals Park in 2008. Given that baseball has long been referred to as “America's pastime,” it seems fitting that most players per capita come from the U.S. capitol.

Second on the list is Pennsylvania. Between the Pittsburgh Pirates and Philadelphia Phillies, there's plenty of high-level baseball to be found, despite the colder weather. The Pirates also were fortunate enough to have one of the most iconic players – Roberto Clemente. After making his debut for the Pirates in 1955, Clemente would lead the National League in batting four times and star in the 1971 World Series. Unfortunately, he tragically died in a 1972 plane crash while on a mission to deliver goods to Nicaragua.

Coast to Coast and Border to Border

From the East and West Coast to the Upper Midwest and Deep South, MLB players come from many states and all walks of life. However, if you're playing the odds, Chicago is the city most likely to be the hometown of MLB players, whereas the South is your best regional option.

Player hometowns were gathered from baseball-reference.com. Population data were based on information from the U.S. and Canadian census programs.

Want to share our findings before you see your next ballgame? Please feel free to use any of the graphics included, as long as you keep it in the field of play by only using them for noncommercial purposes. Please also properly credit OnlineGambling.ca in your coverage and provide a link back to this page.