Comparing Drafted Versus Undrafted Players in the NBA

The NBA draft lasts two rounds each year, and only 60 players are selected (and we say "only" because this draft is dwarfed by the NFL's seven rounds and 256 selections and the MLB's 40 rounds and 1,204 selections). With 30 NBA teams selecting two picks each year, this means there may be a lot of players who wind up on a roster without being drafted.

Drafted vs. Undrafted: Head to Head 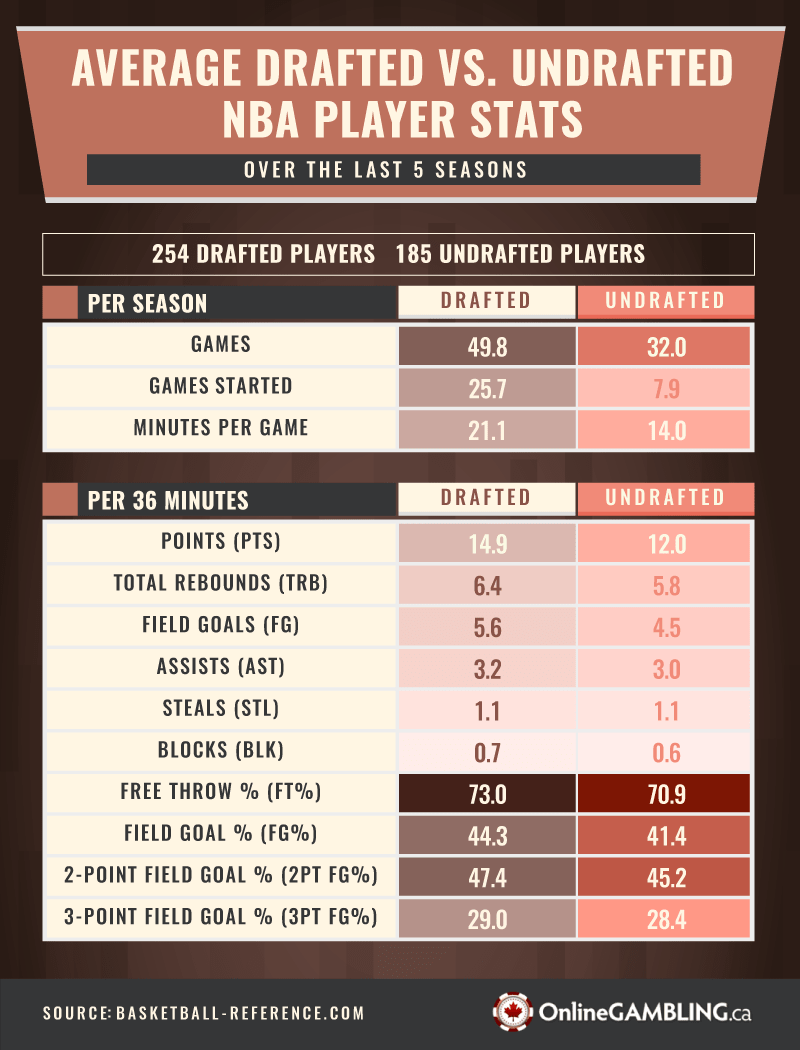 We took a look at both types of players on a position-by-position basis. As far as games played, the biggest disparity was the shooting guard, where drafted players participated in over 50 games, while undrafted guys played in an average of 31. The disparity was less severe, however, across the board, with drafted players slightly getting more playing time.

While in most categories, drafted players had better stats than undrafted players, there were a few areas where the opposite was true. For example, undrafted centers had slightly higher field goal and two-point field goal percentages. Undrafted power forwards outperformed their rafted counterparts when it came to total rebounds and were nearly as efficient at draining threes.

Here, we looked at undrafted players over the last five seasons to see whose star was the brightest. As for centers, Timofey Mozgov, who currently suits up for the Magic, performed the best across the board, followed by former 76er Shawn Long, and the Nets' Alan Williams.

Johnathan Motley gets top billing for power forwards, while Mirza Teletović, who currently plays for the Bucks, came in second for this position. His rebounds, though, were a bit behind the third player in the power forward category – JaMychal Green, who has played for the Memphis Grizzlies for the last several seasons.

The best performing undrafted point guard was Jeremy Lin, who is currently on Atlanta's squad. While his total rebounds are fewer than the third player on this list (Miloš Teodosić), he scored four more points per game than Teodosić.

As far as small forwards go, Kent Bazemore from Atlanta had the best stats of undrafted players, followed by Wesley Matthews of the Mavericks and Robert Covington of the Timberwolves. And Andre Ingram, who played for the Lakers during the 2017-18 season, had the most success as an undrafted shooting guard over the last five seasons.

How the Wins Stack Up

While teams can certainly find success with undrafted players, it does seem that those who are selected every June during the NBA draft do produce better stats and do help carry their teams to better overall seasons. When we adjust the stats per minutes played, they are pretty similar, but when you look at overall success in the NBA, teams that carry more undrafted players tend to lose more games.

We scraped basketball-reference.com for all NBA players of the past five seasons and collected stats, teams, and draft status. From there, the data were analyzed to compare drafted versus undrafted player contributions. We also gathered team records for the asset on win percentage versus the number of undrafted players. Stats were averaged to a per-minute basis to compare stats when both drafted and undrafted players were on the court. These stats were multiplied for the assets that include per 36 data. Players with multiple seasons during the last five years had their stats averaged. Advanced stats were collected but not included in the project. The player's team was calculated as the most recent team the player was a member of. The data included on basketball-reference.com may be incomplete or missing players and are not guaranteed to include every player. For the "Top Undrafted Players" asset, players with multiple positions over the last five seasons were included under the position they played most frequently.

Are you ready to build your perfect NBA roster? Well, if you're an NBA scout, that's probably at the top of your to-do list, but for the rest of us, we just like to dream. If you're wanting to share our findings with your audience, you're completely free to do so for noncommercial purposes – just make sure you link back here so that our team gets the credit they deserve.