When an injured NBA star limps from the court, millions of supporters share in his pain. After all, a single injury can take your team from the top of the pile to bottom of the barrel, dooming playoff aspirations in an instant. The loss can be especially vexing if the franchise bet big on success, forking over millions in salary to a player who gets sidelined. In the NBA, the vast majority of player contracts are guaranteed, meaning athletes receive their pay whether they actually play. In the era of NBA superteams, every bit of capital counts, so it hurts to see a big investment ride the bench.

We decided to analyze earnings and injury figures from the last full season to study how much income flows to players who are too hurt to play. Our results reveal which squads have been particularly unlucky when it comes to paying injured players, and which pros have raked in cash without setting foot on the hardwood. Ready to feel some envy about injury pay in the NBA? Then keep reading. 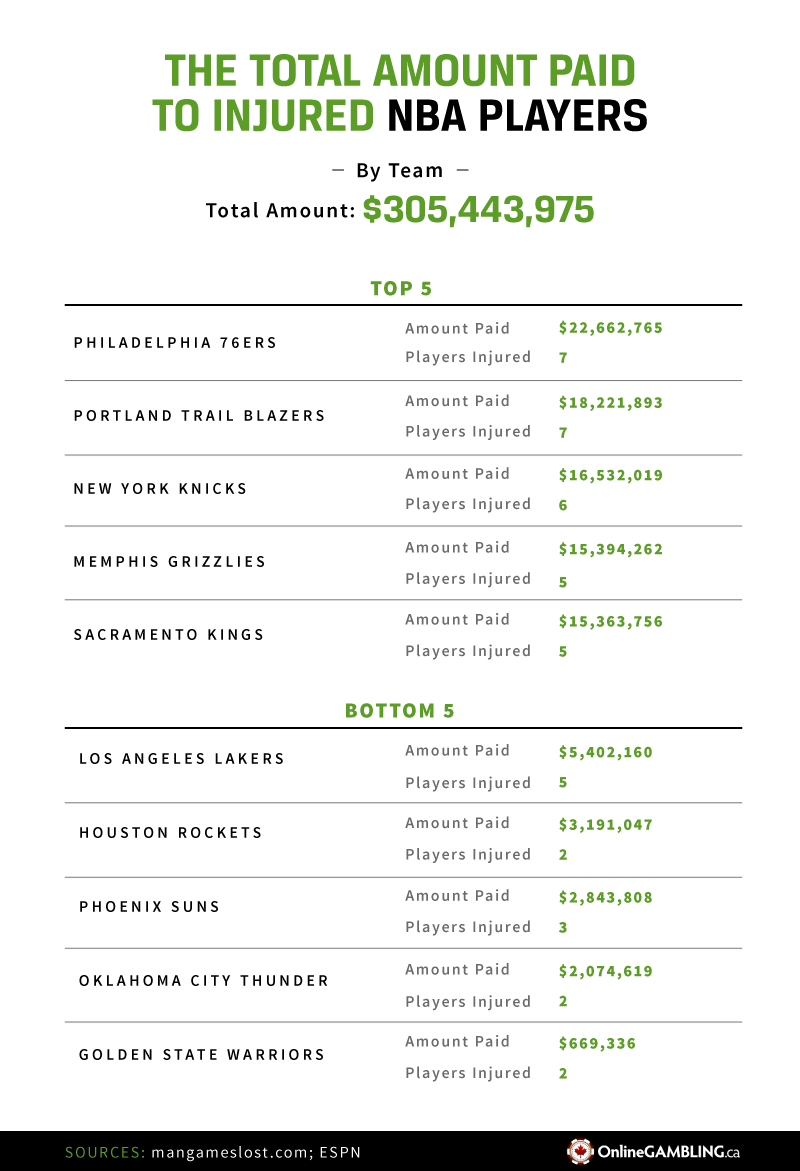 Concerning cash dispensed to disabled players, Philadelphia earned the unhappy distinction of leading all other teams during the 2016-17 season, spending $22.6 million on roster members while they were injured. That figure included compensation for a particular disappointment: No. 1 draft pick Ben Simmons, who fell victim to a foot fracture before the season even began. The Portland Trail Blazers experienced quite a bit of suffering as well, losing players such as Festus Ezeli and Meyers Leonard to the tune of about $18.2 in pay without play. Next came the long-suffering Knicks, with $16.5 million in salary for injured players. Unfortunately for New Yorkers, the 2017-18 season did not bring a change in fortunes on this front.

Can the Warriors let someone else take first place for once? The 2016-17 champs paid less than $1 million to injured players last year, a striking figure given how much the team shells out to its starting five (a couple of days of rest for Steph Curry could have added up quickly). Even the injured pay runners-up, the Oklahoma City Thunder, paid roughly three times as much to ailing players as Golden State. Phoenix, Houston, and Los Angeles rounded out the five teams who spent the least on players recovering from injury. For the Suns and Lakers, this stat may be a rare bright spot in a season they’d rather forget. 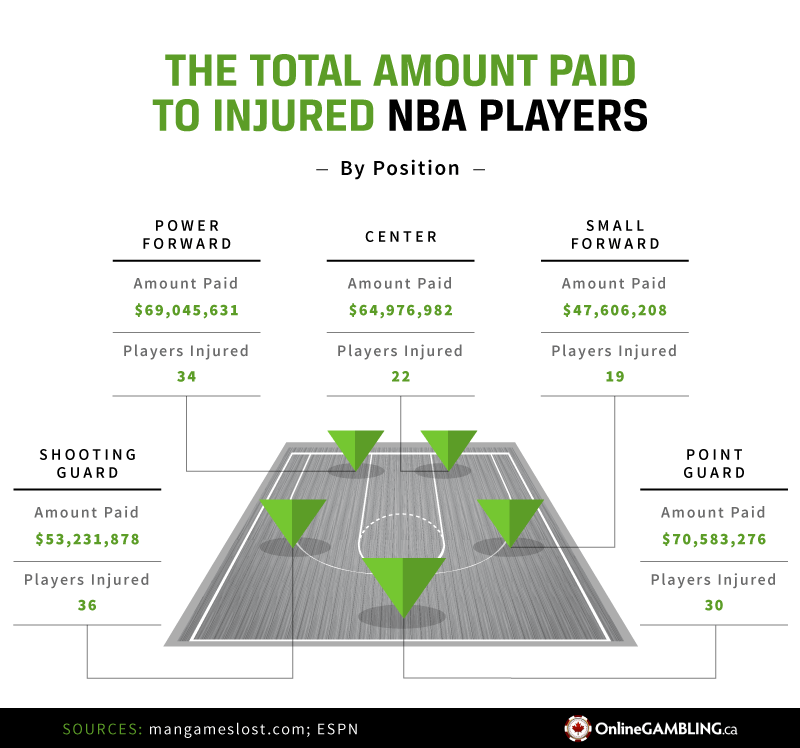 While banging in the paint does no favors to the bodies of NBA big men, just 22 centers were injured during the 2016-17 season. The only position less prone to injury was small forward, with 19 players hurt. Power forwards and shooting guards, however, did tend to take a beating, with 34 and 36 injured at each position respectively. Point guards were in the middle of the pack, with 30 out at some point during the season.

Regarding compensation during times of injury, though, ball handlers were most expensive on the bench, followed by power forwards. Given the limited number of centers injured, however, the total injury earnings at that position might be most notable. There were some pretty significant injuries at center around the league during the 2016-17 season, including the unfortunate cases of Andrew Bogut, Joel Embiid, and Nikola Peković. Conversely, shooting guards seemed to cost teams relatively little when hurt, despite having the most injuries of any position. 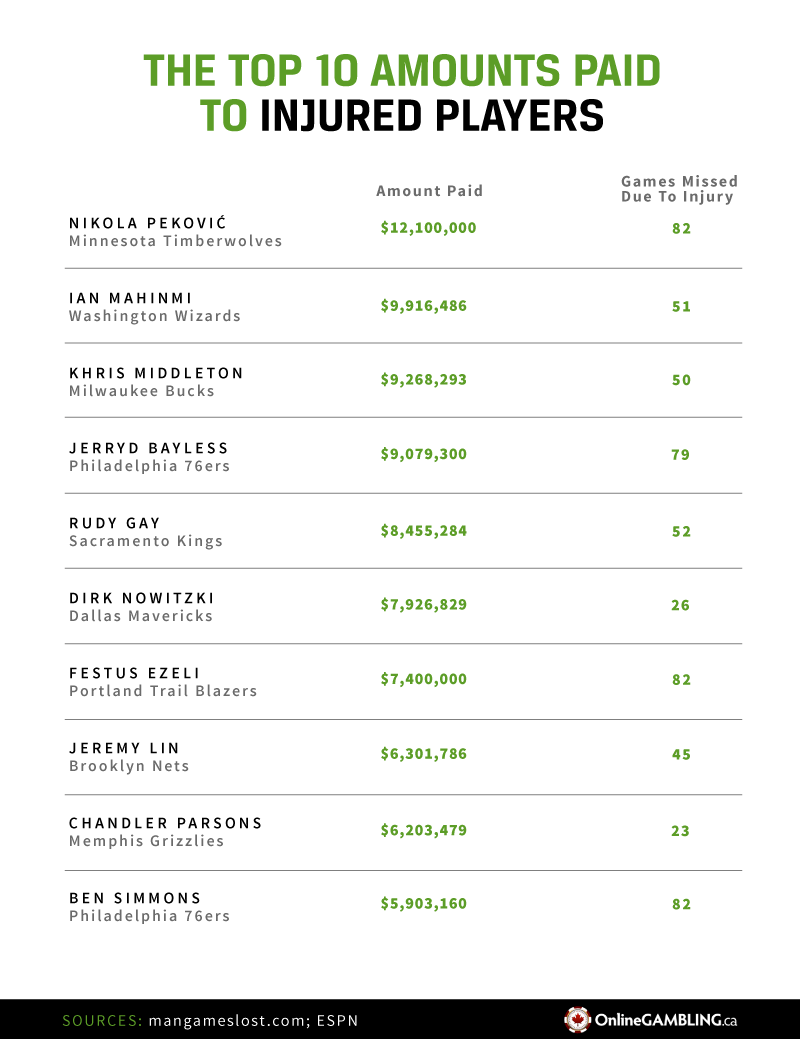 Nikola Peković’s ankles and Achilles may have cost the Timberwolves $12.1 million in playing time in 2016-17, but they cost the big man his job when he was waived the following year. Ian Mahinmi, however, has bounced back after a $9.9 million year on the bench, crediting weight loss for his nimbler play since. Even greater success arrived for Khris Middleton, who overcame an absence of 50 games to provide some exceptional shooting for the Bucks. If only the same could be said for Jerryd Bayless and Rudy Gay, who have encountered injuries once again a season later.

The cost of compensating veteran star Dirk Nowitzki is something of a touchy subject in Dallas: However beloved he is by Mavericks fans, his production declined in the face of injuries last season before he was sidelined altogether. Jeremy Lin may be the even sadder case, however: After missing much of the 2016-17 season, he sustained another season-ending injury in the first game of the following season, crushing Nets fans’ hopes of a return of “Linsanity” in the Big Apple.

Sure, NBA stars are paid to play – and seeing a highly compensated baller ride the bench would frustrate fans of any franchise. But while our findings show injuries don’t necessarily affect a player’s wallet while he recovers, we should appreciate caution with all medical concerns. If athletes went unpaid during times of injury, they might rush back to the court before they were ready. That could lead to further pain or career-ending health problems, a fate no fan would welcome. So next time you’re venting about a player’s absence from the lineup, cut them some slack. Athletes suffer too – even if their paychecks don’t.

The pros of the NBA may risk injury each time they take the court, but taking chances doesn’t have to have such high stakes. OnlineGambling.ca allows you to find the best places to bet online, with in-depth reviews and sky-high bonuses.

We collected data from mangameslost.com, a database of statistics related to injuries sustained by professional athletes. We also incorporated statistics on player salaries from ESPN.com to project the payment they received during periods of injury. With each source, we specifically considered information pertaining to the last full NBA season, 2016-17.

No statistical testing was performed, so the claims listed above are based on means alone. As such, this content is purely exploratory, and future research should approach this topic in a more rigorous way.

We welcome you to share our information and images with your audience for noncommercial purposes. If you do, please provide a link to this page to attribute us appropriately. Without a nod for our hard work, our feelings may get a little injured.