Head Coach Turnovers Over the Past 20 Seasons

The job of a top-tier sports coach is highly coveted, but even the best coaches can find themselves in the hot seat after a few bad seasons. Few things are as unforgiving as a fan base of a professional sports team, and pressure from outside (and inside) a team can send a coach packing.

We looked at coach turnover rates over the last 20 seasons across the four major sports leagues in the U.S. (NBA, NHL, NFL,and MLB) to see how these turnovers relate to team success and which coaches have had the most chances to turn a team's fortune around. Let's take a look.

First, we looked at teams with the most (and least) number of coaches over the last two decades, league by league. In the NBA, three teams had a dozen coaches in that time frame: the Brooklyn Nets, the Detroit Pistons, and the New York Knicks. On the other hand, the San Antonio Spurs had a grand total of one head coach over the last 20 seasons. Gregg Popovich has manned the helm down in San Antonio since the 1996-97 season, currently in his 23rd season as the head coach.

Next, let's look at the NHL. The New York Islanders held the dubious distinction of not only having the most coaches over this 20-year span but also they had the most coaching turnovers of all four leagues – 13 coaches, in fact. The team with the fewest coaches was the Nashville Predators.

A small handful of NFL teams were tied with the most coaches at 10, and there was a three-way tie for the teams with the fewest head coaches – the Baltimore Ravens, the New England Patriots, and the Pittsburgh Steelers. The Steelers, in fact, are pretty distinct in this category, as they have only had three head coaches since the late '60s.

Finally, there was one MLB team that had 12 skippers over the last 20 seasons: the Miami Marlins. There were six baseball teams, though, with the fewest number. The Atlanta Braves, the Los Angeles Angels, the Minnesota Twins, the New York Yankees, the San Francisco Giants, and the St. Louis Cardinals had only three managers each over this period. 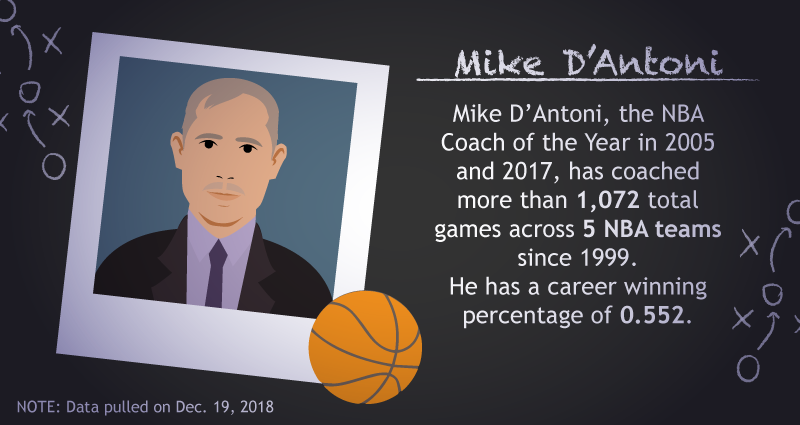 The NBA Coach of the Year in 2005 and again in 2017, Mike D'Antoni, has coached for five teams in the league since 1999. He's also coached more than 1,072 total games and has a career win percentage of 0.552. While D'Antoni is currently the head coach of the Houston Rockets, he's had stints with four other teams, notably the New York Knicks during Jeremy Lin's outstanding run (who also gives D'Antoni a ton of credit for his success during that time). 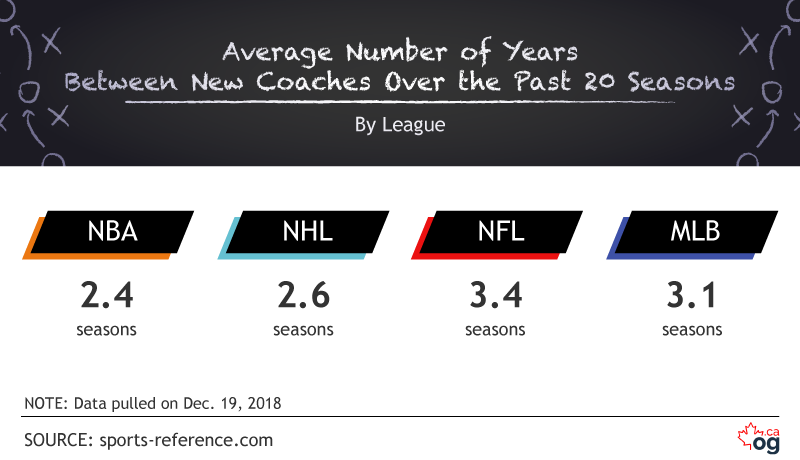 Here is the average number of seasons between coaches from league to league. The league that switches out coaches the most frequently was the NBA, with an average of every 2.4 seasons. The NHL was right behind with a new coach taking the reins every 2.6 seasons on average. MLB's average time between managers was just a bit longer at every 3.1 seasons.

The NFL, however, clocked in with the largest number of seasons between head coaches, with an average of every 3.4 seasons. This means there are fewer coaching turnovers in the NFL, especially when compared to the full-year difference between the NFL and the NBA. 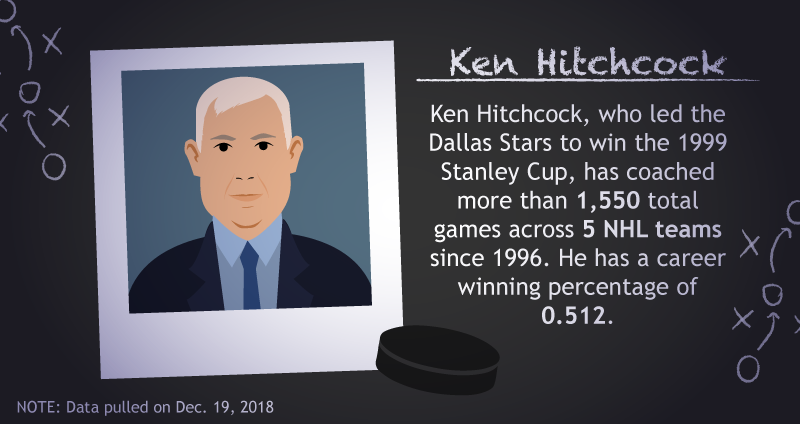 Another long-standing coach is Ken Hitchcock, who led the Dallas Stars to a 1999 Stanley Cup championship and a Western Conference championship the following season, where they ultimately fell to the New Jersey Devils four games to two in he Stanley Cup Final. He's coached five NHL teams since 1996 and has been the head guy for over 1,550 total hockey matches.

When Less Is More 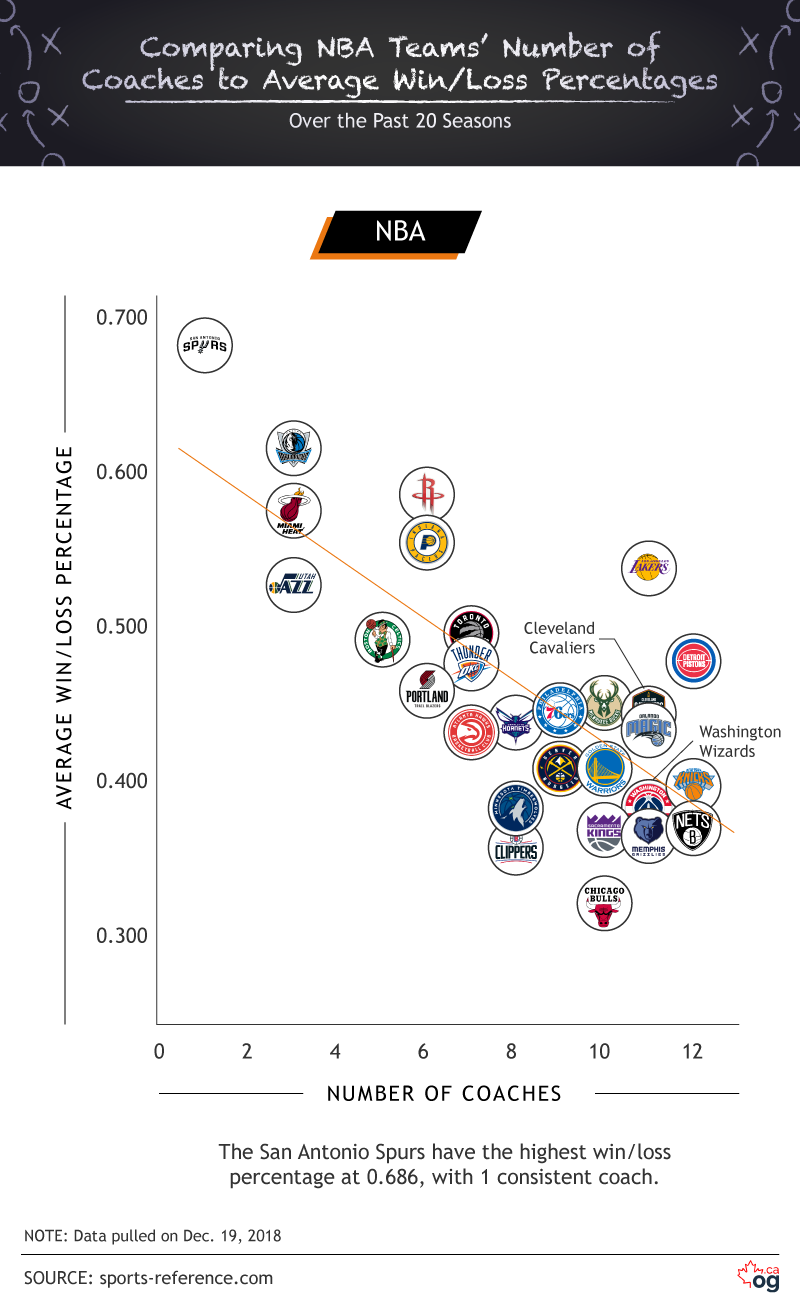 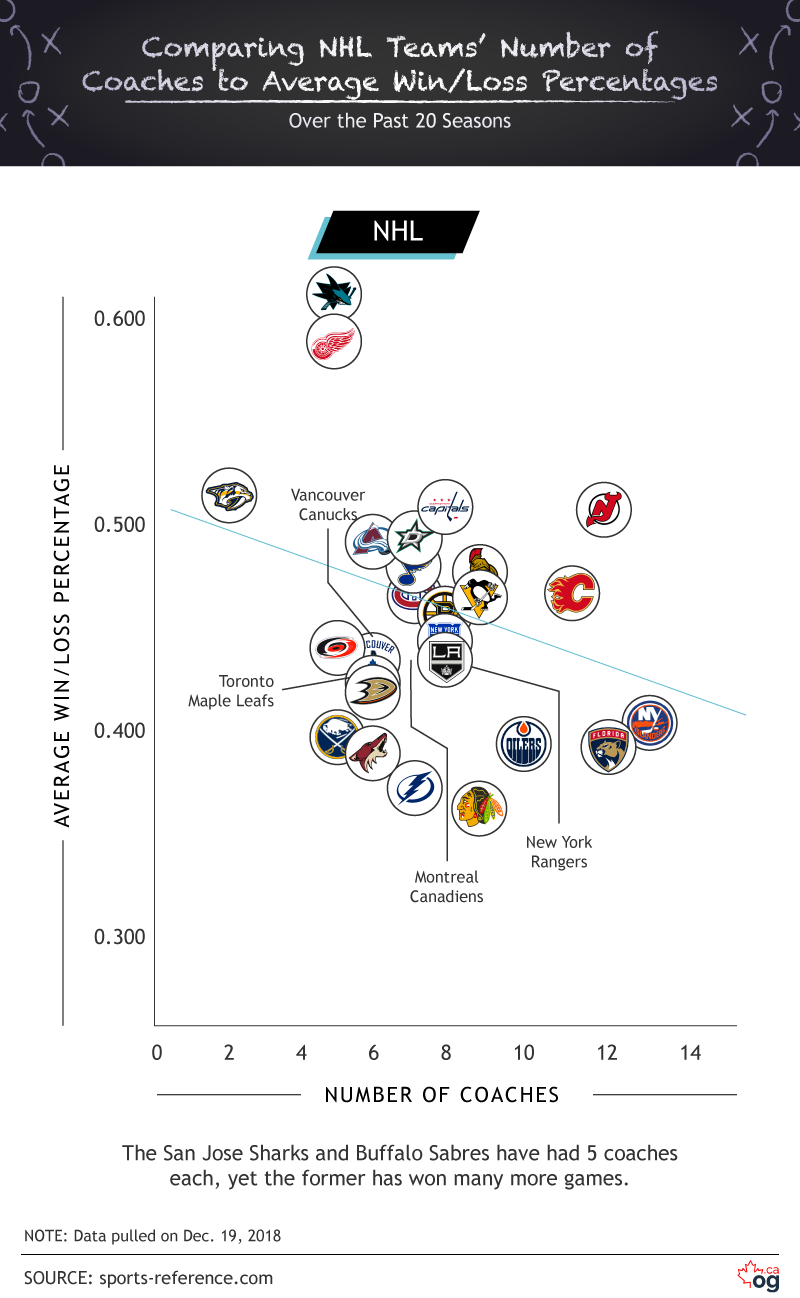 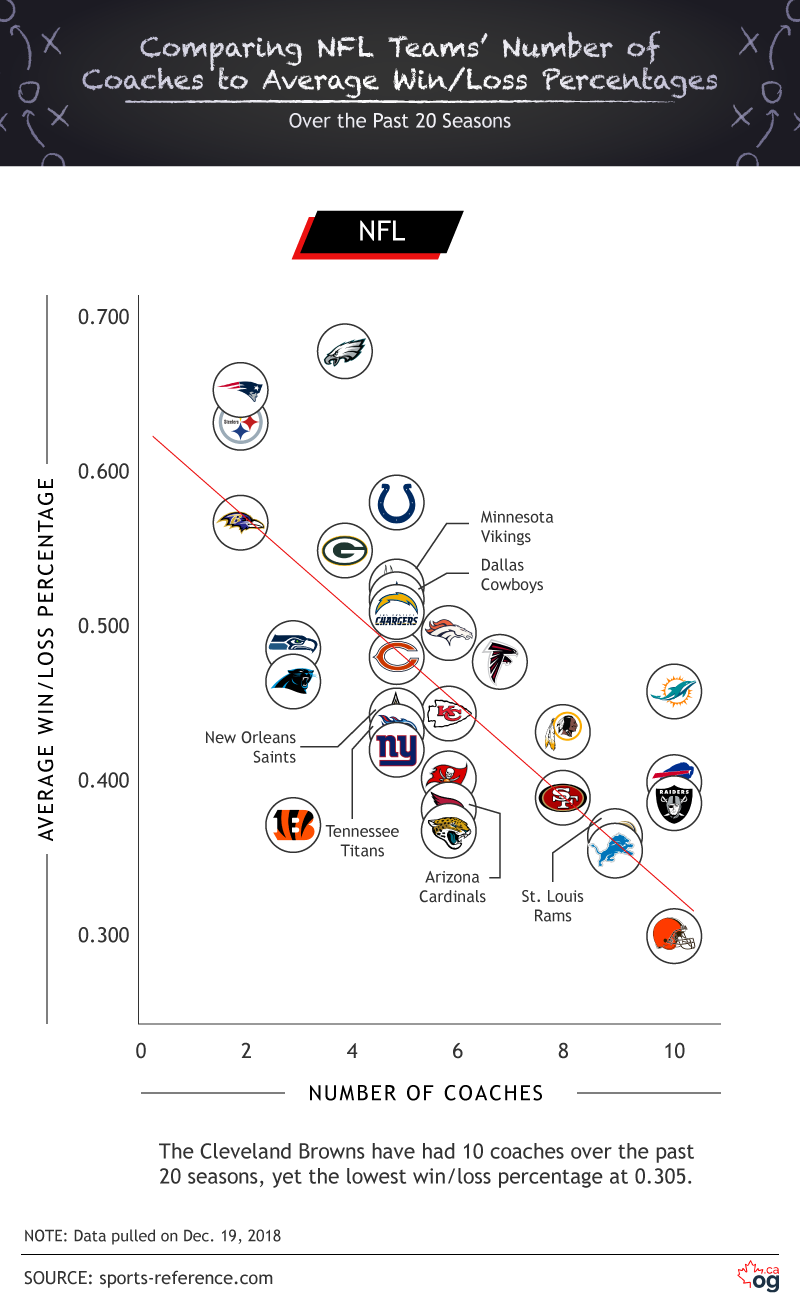 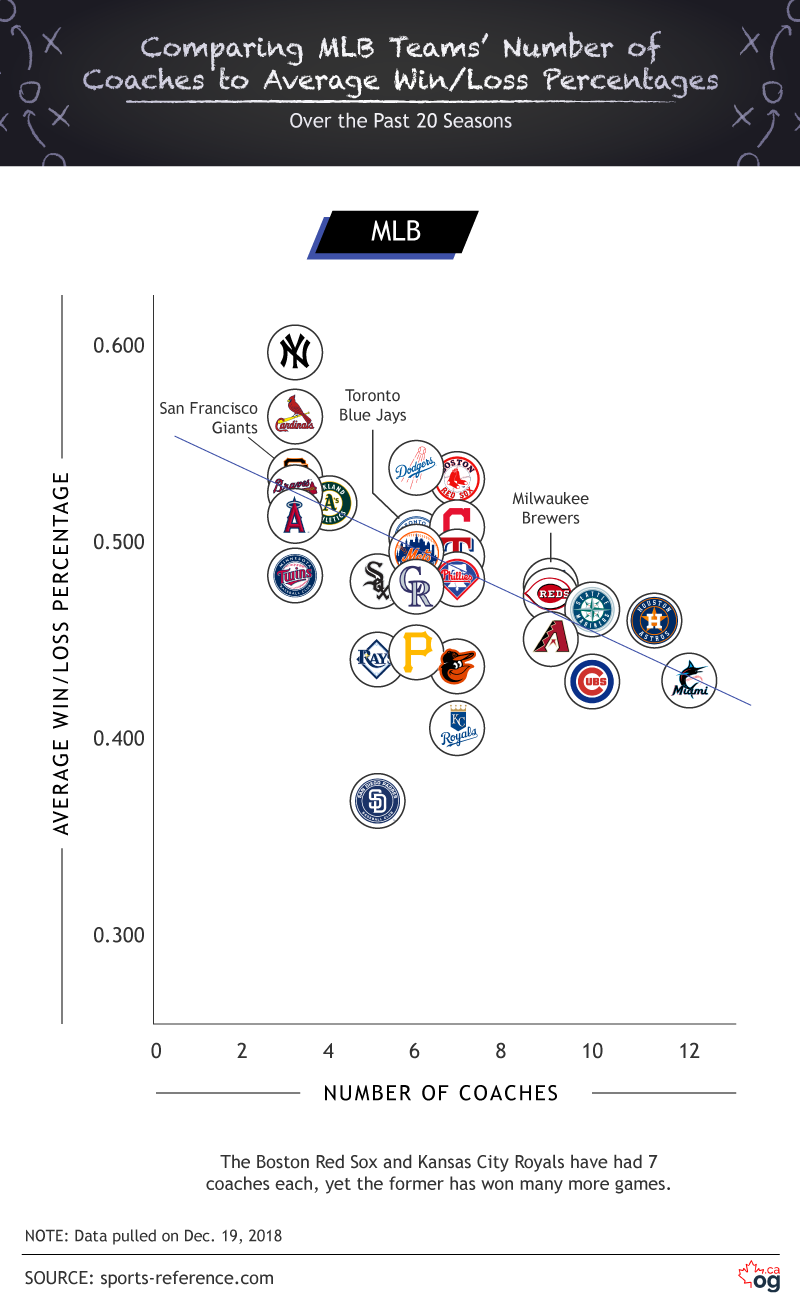 Here, we're comparing the number of coaches to average win/loss percentages over the past 20 seasons on a league-by-league basis. Overall, the more head coaches a franchise has, the lower their win percentage tends to be, so those with fewer turnovers tend to have much better records.

A high coach turnover rate probably happens because the team hasn't enjoyed a lot of success, so the powers that be want to move onto (hopefully) greener pastures with the hiring of a new coach. That doesn't always work out, however.

Take the NFL for example. One team that has had a lot of coaching turnover over the last two decades is the Cleveland Browns. They've elevated 10 guys to the top coaching spot, but their win/loss percentage is the lowest in the league at 0.305. There are a few outliers, though, such as the Philadelphia Eagles. They've had four head coaches over this period but have the highest win percentage overall (0.681). In the other direction, the Bengals don't exactly fit the trend either with three head coaches but a sub-0.400 win percentage.

In the NBA, we have the San Antonio Spurs. They've benefitted from one coach (Pops, as mentioned above) over the last 20 seasons and have the highest win/loss percentage at 0.686. The three teams who have employed 12 coaches over that period have significantly lower win percentages – all below 0.500.

In the NHL, both the San Jose Sharks and the Detroit Red Wings are outliers from the trend. Both teams have had five head coaches, but the Sharks edge out the Red Wings in win percentage. The team with the fewest number of coaches, the Nashville Predators, is pretty far behind in win percentage but definitely fits into the basic trend of the league.

Finally, in MLB, the trend keeps true for the most part, but there are definite differences along the way. Of particular note, both the Boston Red Sox and the Kansas City Royals have had seven managers, but the Red Sox have a much higher win/loss percentage than the Royals (0.531 to 0.408). While both have won a World Series during this time frame (and in Boston's case, multiple), the overall numbers tell a different story. 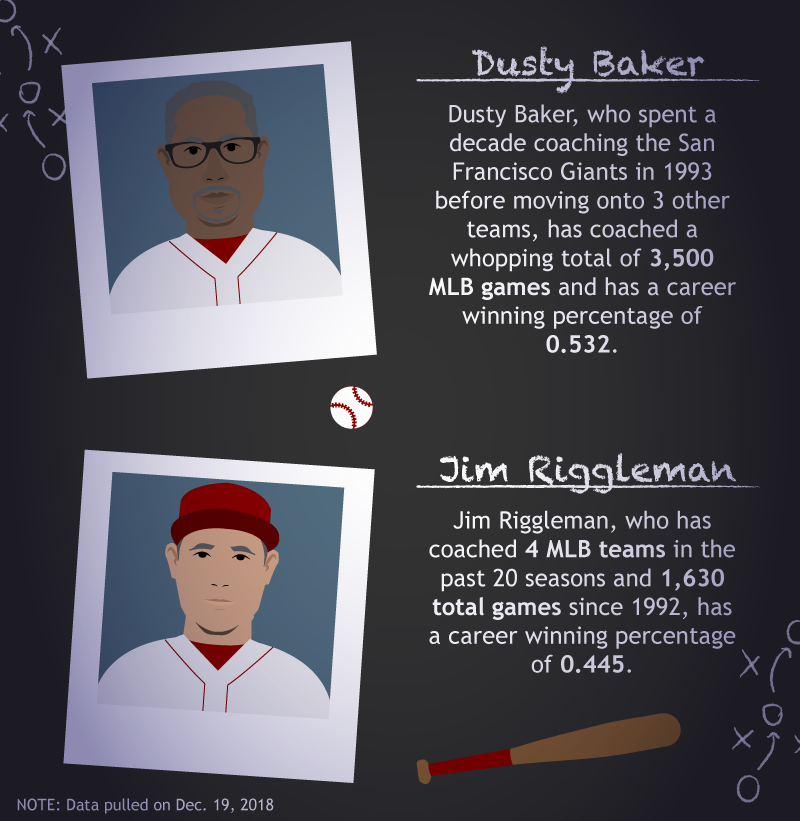 There are a couple of MLB managers we'd like to highlight. Dusty Baker has had coaching gigs for four MLB teams, accumulating 3,500 MLB games and a career winning percentage of 0.532. He's been selected three times as Manager of the Year, and he took his San Francisco squad to the World Series in 2002, where the Anaheim Angels defeated them in seven games.

Jim Riggleman, who also has managed four MLB teams, has coached 1,630 total games with a win percentage of 0.445. He hasn't had quite the success as Baker, and he had several gaps between coaching gigs throughout his career, but he's had several second chances, most recently in Cincinnati with the Reds.

Finally, we examined coaches who've coached in their respective leagues three or more times, and we found marked differences between each league.

The NBA had a whopping 24 coaches who've coached for three (or more) teams over the past two decades. This was five more than the next nearest league, the NHL, which had 19 coaches with this distinction.

In the MLB, there were fewer yet, with only 11 skippers leading at least three teams, and the NFL had only seven coaches in the top spot for three or more franchises.

First, in the NBA, Mike D'Antoni led the way with five clubs. He's been with Houston for the 2017, 2018, and 2019 seasons; he ended the 2018 season first in their division and came in second in 2017, both times leading to a playoff spot. Most recently, he earned the Western Conference Coach of the Month in December of 2018. 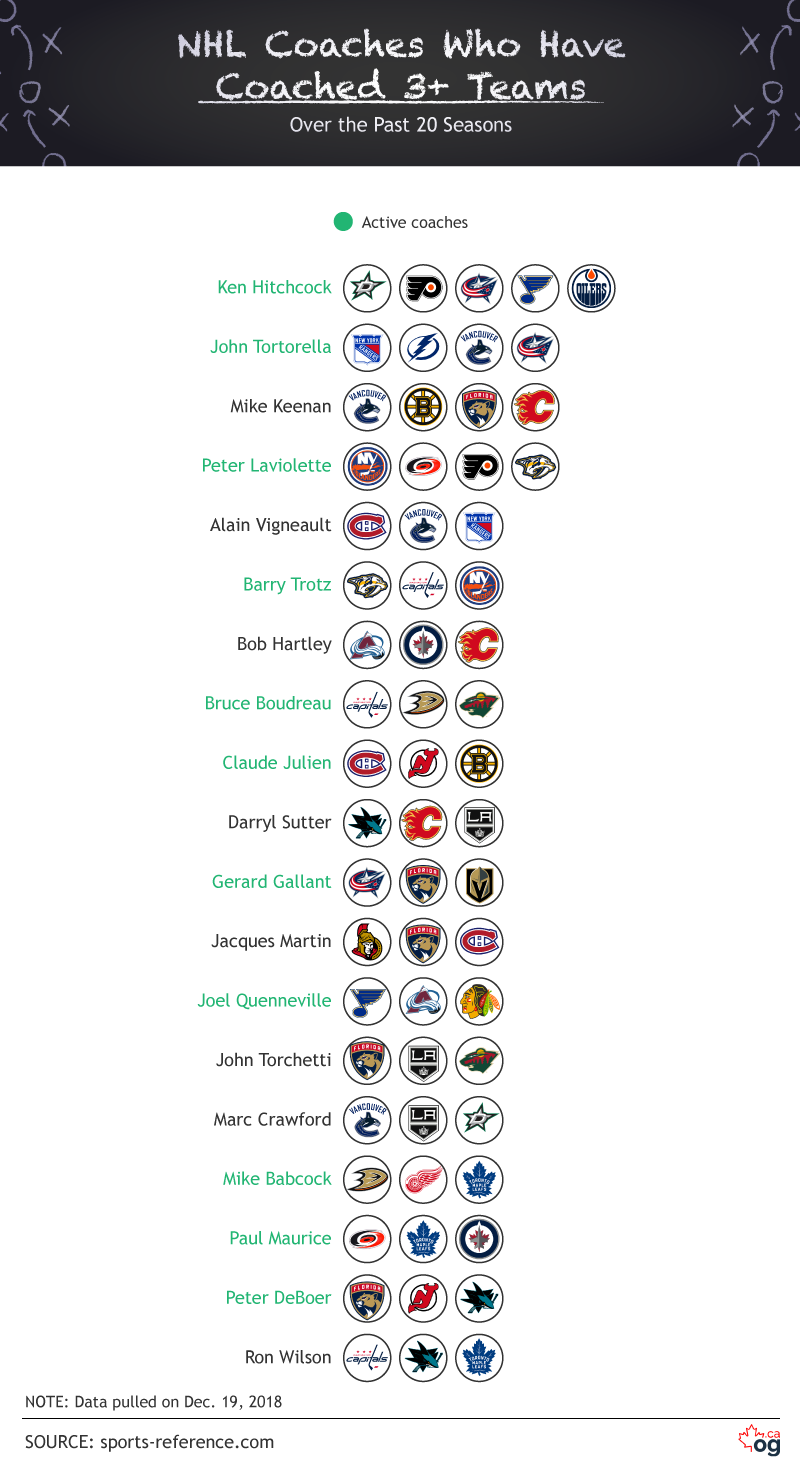 In the NHL, there was one coach, in particular, who really stands out. Ken Hitchcock, mentioned above, has coached for five NHL teams over his 20-plus-year career. More interestingly, he's done this without much of a break. Most recently, he was fired as the Blues coach a little over midway through the 2016-17 season but got another gig the following season with Dallas (again, after which he briefly retired). He currently leads the Edmonton Oilers. 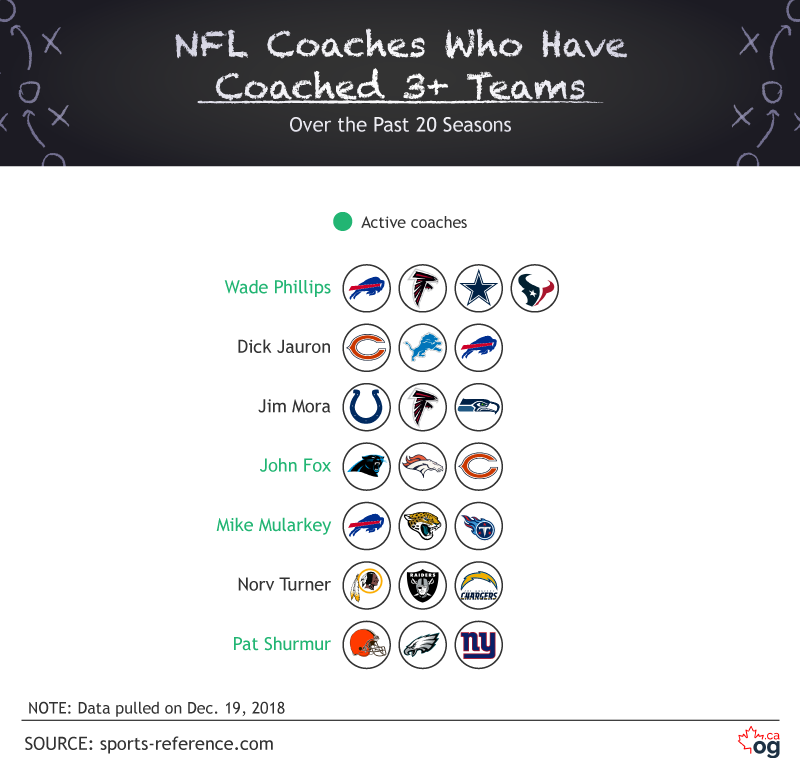 Wade Phillips led the NFL with head coaching gigs across four franchises. While Phillips has held the job of head coach several times, he's been the defensive coordinator in the NFL far more often and has been in that position for the last seven seasons (for three teams). 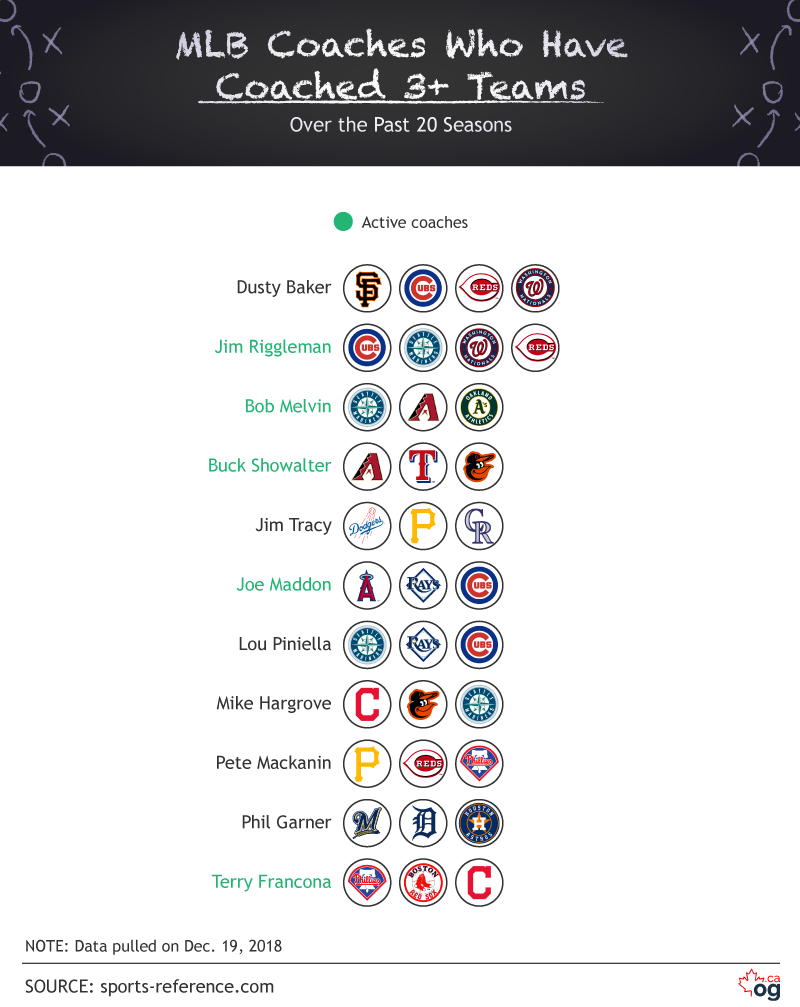 Two MLB skippers have been in the top spot for four franchises: Dusty Baker (Giants, Cubs, Reds, and Nationals) and Jim Riggleman (Cubs, Mariners, Nationals, and Reds). Riggleman was most recently the manager of the Nationals in 2018 and is now the bench coach for the Mets. However, he hasn't been in the manager position since becoming one for the first time in 1992. In fact, there were a few big gaps – he led the Cubs from 1995 to 1999 but didn't get a manager job again until 2008, and after a three-year stint with the Nationals, he had a seven-year gap before going to Cincinnati. 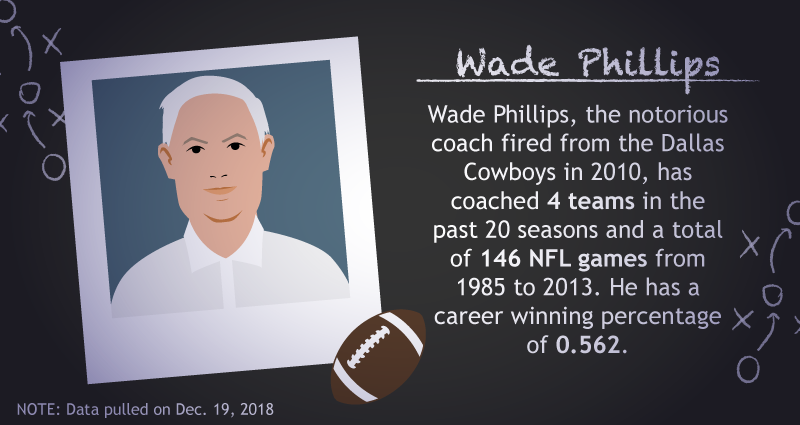 One of the most prolific coaches in the NFL is Wade Phillips, who has been the head coach for four teams over the last two decades. Over the 146 NFL games he coached from 1985 to 2013, his career win percentage was 0.562. Phillips has been around the NFL for a very long time and is currently the defensive coordinator with the Los Angeles Rams, who lost the 2018 Big Game to the New England Patriots. He's worked in the NFL in some capacity for nearly five decades.

The coaching carousel usually begins to spin in earnest after each regular season ends. Head coaches often find their way to the hot seat well before the clock ticks down to zero or the final out is called, and their firing is often no surprise. While a steadfast captain helps keep a franchise on an even keel, even the best coaches can find themselves on the outside looking in as the season ends – sometimes getting a second (or third) chance on another team. Those who are in a head coaching position can usually stay put while their team performs well. Teams that have a high turnover rate, then, do not always have the best seasons, and it's not too much of a stretch to notice that low win percentages often go hand in hand with a high coach turnover rate.

To collect data on coaches from the NFL, MLB, NHL, and NBA from the last 20 seasons, we used Python to scrape sites provided by sports-reference.com. Namely, these were pro-football-reference.com, baseball-reference.com, hockey-reference.com, and basketball-reference.com. To be included in the study, coaches could have started coaching before 1998, but we only included and analyzed their stats from 1998 and later. The data were scraped on Dec. 19, 2018. We excluded the Vegas Golden Knights, Columbus Blue Jays, Minnesota Wild, Winnipeg Jets, Washington Nationals, New Orleans Pelicans, and Houston Texans from the visualizations showing teams over the past 20 seasons, as these teams are younger than 20 seasons old. We did include these teams in the visualization for coaches who have coached 3+ teams over the past 20 seasons. The collected data include data up to the 2019 season for the NBA and up to 2018 for MLB, the NFL, and the NHL.

Do you have an urge to share our findings with your readers (for noncommercial purposes, of course)? To avoid putting yourself in the hot seat, make sure you provide a link back here so that our contributors get credit for their work.