The Odds of Winning Battleship

Over the last 50 years, which two-player board game has been turned into a major motion picture, is considered by many to be one of the best games of all time (and one of the best to bond over), and can even help players develop problem-solving and planning skills?

Don't let the simplicity of the rules fool you – Battleship is one of the most popular board games of all time for a reason. Just because there aren't a lot of guidelines doesn't mean a more sophisticated strategy won't help your odds of winning. We surveyed 1,000 people about their playing patterns to learn where you should consider placing your pieces, which spots you might want to hit first, and the most common (and avoidable) ship locations. Ready to sink some ships? Continue reading to learn more.

When it comes to Battleship, strategy is still king if you want to be crowned the victor. Just because the whole board is your oyster doesn't mean you should go in blind when you plot your ships at the start of the game.

If you want to walk away with the best claim for bragging rights after a bout of Battleship, you'll want to consider these key points for upping your odds of winning at the end of the day. Whether it's your carrier ship, a cruiser, or even a submarine, a smart player will take advantage of lining one (or more) of his or her ships directly along the base of the board. Carrier ships – because they account for more holes on the board than any other piece – are best placed along the outline of the game board, though not directly in the any of the corner spots.

If you're planning on putting one of your pieces in the middle of the board, consider using one of your smaller ships (like the submarine) and lining it up tightly with ships that are hugging the border of the board. Given the most common attack patterns and positions people told us they approached Battleship with, we wouldn't recommend tempting an opponent with your carrier ship in open waters.

You Sank My Battleship! 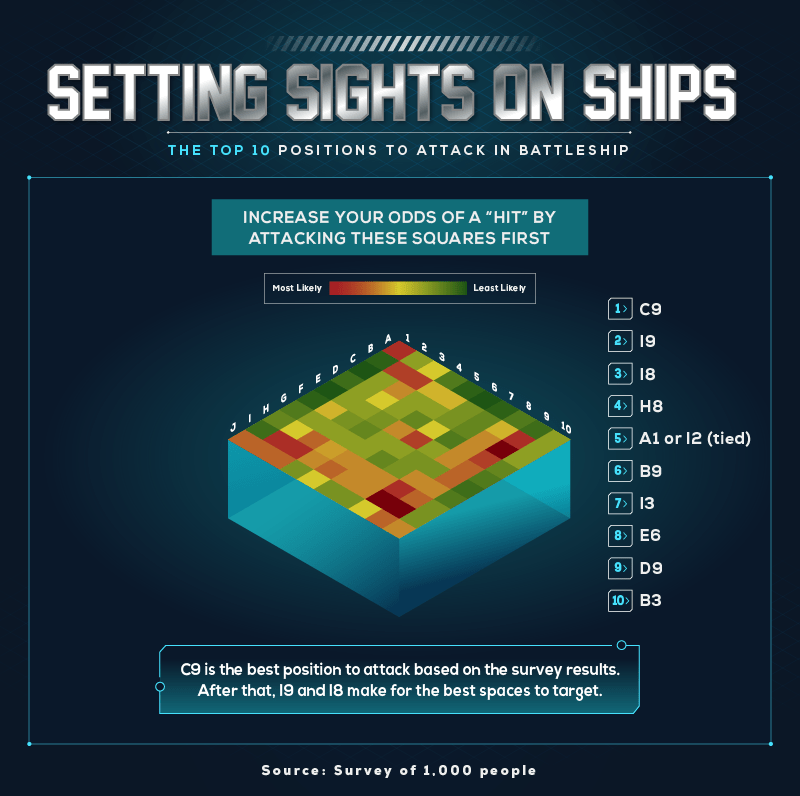 Before you go into your next epic round of Battleship, you might want to make a note of the positions we're about to share with you.

There's no guarantee that attacking any particular spot is going to earn you a hit (or even better – a sink), but based on the locations where 1,000 people told us they frequently placed their ships, we found a few that may give you a leg up over the competition.

While some players recommend shooting in diagonal lines or thinking of the grid more like a game of checkers, it's always nice to have a go-to strategy for your first attack. The No. 1 spot you should try to go for first? C9. And because just one hit won't get the entire job done, we also recommend targeting spaces like I9, I8, H8, and A1 (or I2 – tied for fifth place) as your primary targets.

Whatever you do, try to avoid clustering your shots too close together. Firing shots in various locations around the board will give you a better (and broader) sense of your opponent's tactics and may help you piece together their strategy before they start to figure out yours. 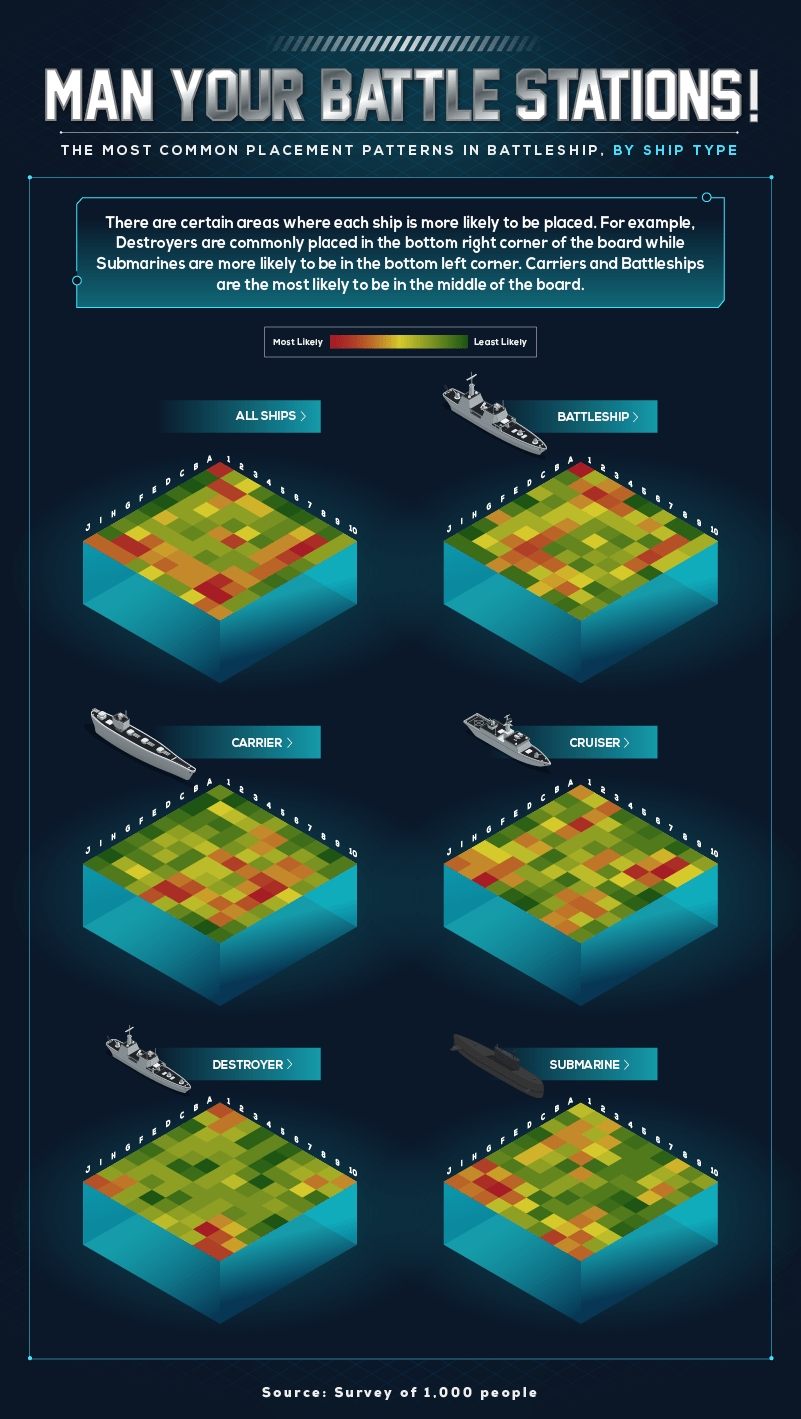 For better or worse, our survey revealed which patterns were the most popular for players plotting their course toward (potential) victory.

While we recommend using the edge of the board to shield your pieces from your opponent's attacks, our study found the most popular positioning was in the I row and 9 column. Specifically, the C9, I8, and I9 positions were the most common (also making them some of the best possible targets). The carrier ship, the game's largest target, followed the same pattern and was more likely to be placed in the middle regions of the board than any other ship – a tactic we wouldn't necessarily advise.

Smaller pieces, like the cruiser and destroyer, can be some of your most versatile ships, and players had a variety of opinions on where best to place them. While the corners of the board made favorite bidding places for the cruiser, players were the least likely to leave their destroyer out in open waters compared to any other piece.

Whether you're playing one of the many variations of Battleship or even a digital version on your smart device, we have a few tips and tricks you should keep in mind when building your defenses or laying out the attack. Just remember not to take any of it too seriously – it's just a game, after all.

If you're looking to raise the stakes a bit, OnlineGambling.ca has some of the safest and most secure online gambling picks for you. With our vetting process and site reviews, you'll never have to worry if a casino is credible again. From slots and roulette to video poker and bingo, we'll help you find the best online casinos with real money and the best jackpots. For fast payouts and hidden bonuses, visit us online at OnlineGambling.ca and start playing today.

For this project, we surveyed 1,000 people who had a sufficient understanding of the rules of Battleship. We asked them to place the five ships on the board and then place five attacks, assuming that none of their previous moves resulted in a hit. For more information on how to play Battleship, please visit www.hasbro.com/common/instruct/Battleship.PDF.

You've sunk our battleship! We don't mind if you share the tips and tricks you've read here for noncommercial purposes; we only ask that you ensure a link back to this page, so our contributors earn credit for their work.