The postwar baby boom was so huge, it became the identity of a generation, but smaller baby booms have taken place over the years. While not related to servicemen returning home from World War II, there have been spikes in conceptions here and there throughout our history, and these baby-making trends aren't always a coincidence.

Holidays, sports championships, natural disasters, and widespread blackouts have also led to an uptick in conceptions. This led us to survey 1,000 Americans about when, where, and even how they conceived their first child. Curious to see the likelihood of you conceiving on that vacation you've been planning for months? Continue reading to see what we discovered. 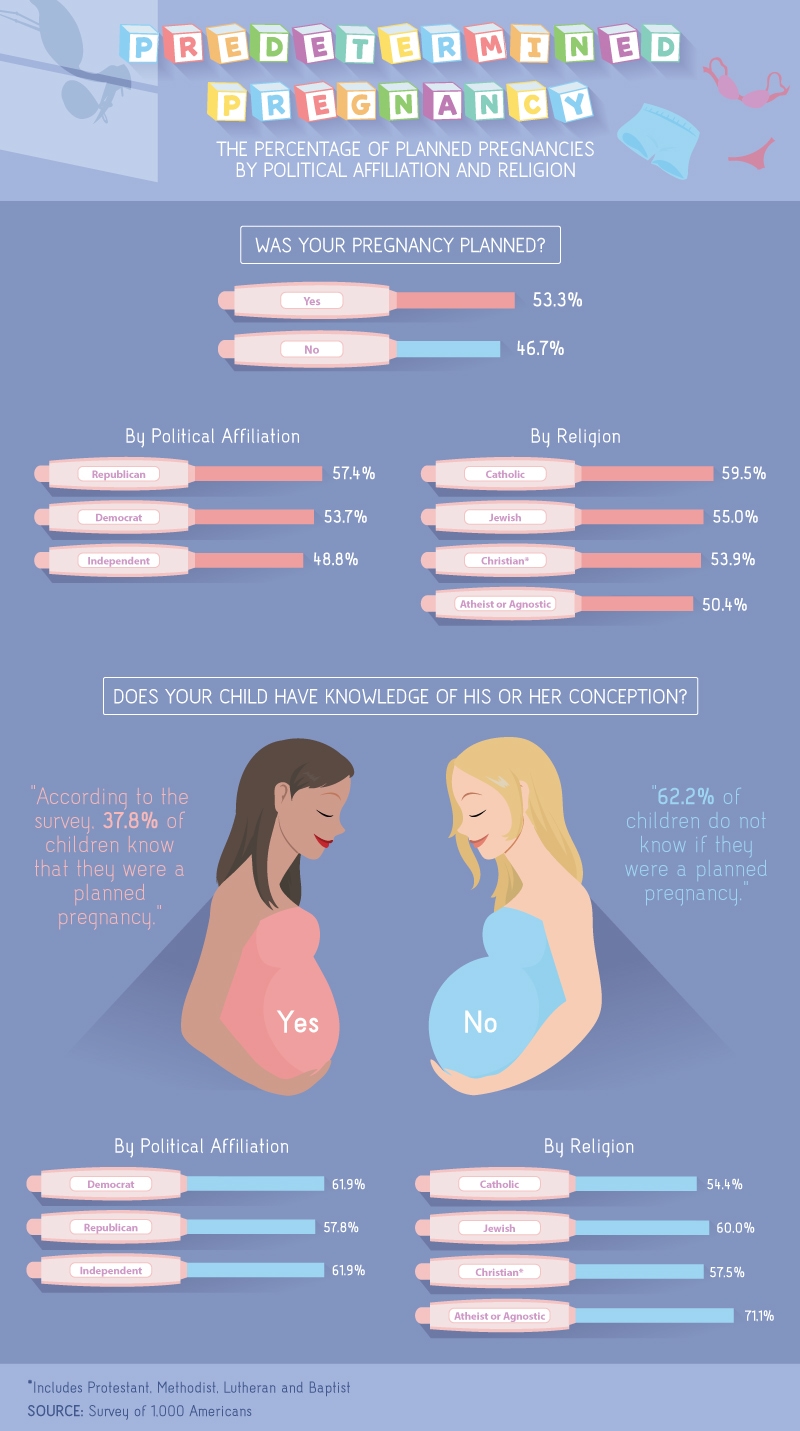 As everyone knows, not all pregnancies are planned. According to our survey, over 53% of pregnancies were planned and nearly 47% were not.

It turns out Republicans were most likely to plan for children, followed by Democrats and Independents. When it came to religion, Catholics were the most inclined to plan for pregnancy (nearly 60%), followed by Americans who identified as Jewish (55%), Christian (close to 54%), and atheist or agnostic (over 50%).

And while it may not be a dinnertime topic, nearly 38% of children knew about their parents' intent when they were conceived – however, over 62% had no idea.

Republican respondents were the most likely to spill the beans on whether their kids were planned, while Democrats and Independents were next in line, both equally apt to tell the whole story (at a rate slightly above 38%). On that note, Republicans generally tend to value traditional families and champion the pro-life stance, so they may be more eager to impart their pregnancies as planned.

As far as religion goes, Catholic respondents were also the aptest to share their conception stats, coming in at nearly 45%.The Catholic religion teaches that marital sex is a positive event, and each sexual interaction should be open to the conception of a child – as a result, Catholics may be more open to talking about conception with their children as they raise them with similar values. 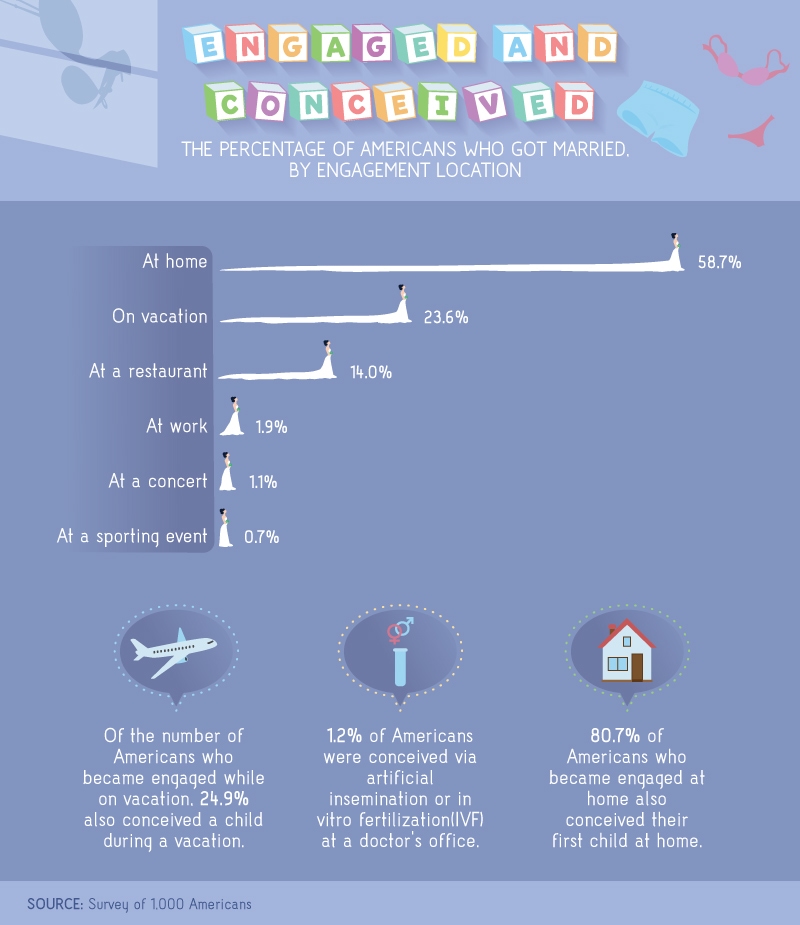 Getting engaged 'on location' is often the result of big plans and grand adventures. Nearly 59% of respondents identified as getting engaged at home and staying the course until marriage. Further, almost 24% of participants that bent the knee on vacation managed to make it down the aisle. Restaurants were also popular locales for proposals, as 14% said that's where they got engaged.

Interestingly, almost a quarter of those who got engaged on vacation also conceived a child while vacationing. Maybe it's something in the water, or it's just so darn relaxing and romantic being away from home.

While probably not many get engaged at a doctor's office, a tick over 1% of participants conceived there, either through artificial insemination or in vitro fertilization (IVF).

Ringing in the Holidays With Babies 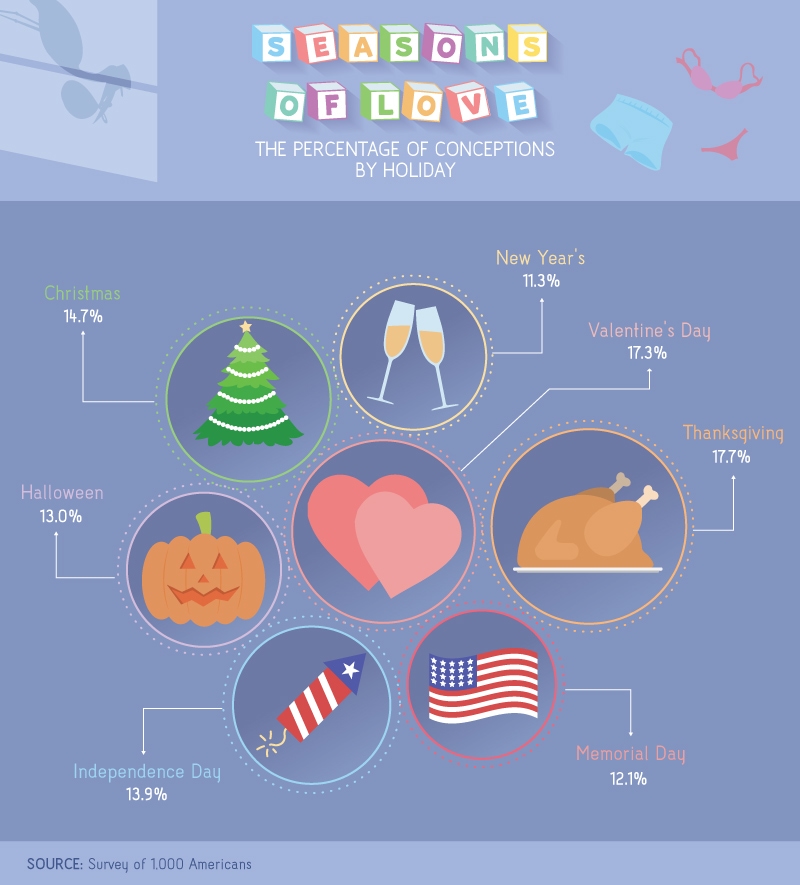 Holidays usually bring us closer, right? While you might think that Valentine's Day – in all its romantic glory – would take the top spot for the greatest percentage of conceptions, it was not to be. In fact, the holiday where you stuff yourself silly won the prize, as most babies were conceived on or near Thanksgiving. It turns out that all that food and family prompts couples to pair off and make those babies – 17.7% of the time, according to our survey.

However, don't despair lovebirds, as Valentine's Day came in a strong second. Those lovey-dovey feelings definitely lead to a mini baby boom months later, at least in over 17% of cases. Christmas (14.7%) was next on the list – unwrapping gifts doesn't have to end on Dec. 25 for those who conceive during this holiday, as this present won't make an official appearance until about nine months later. Independence Day (13.9%) came in next; apparently, the fireworks don't always stop once the show is over. 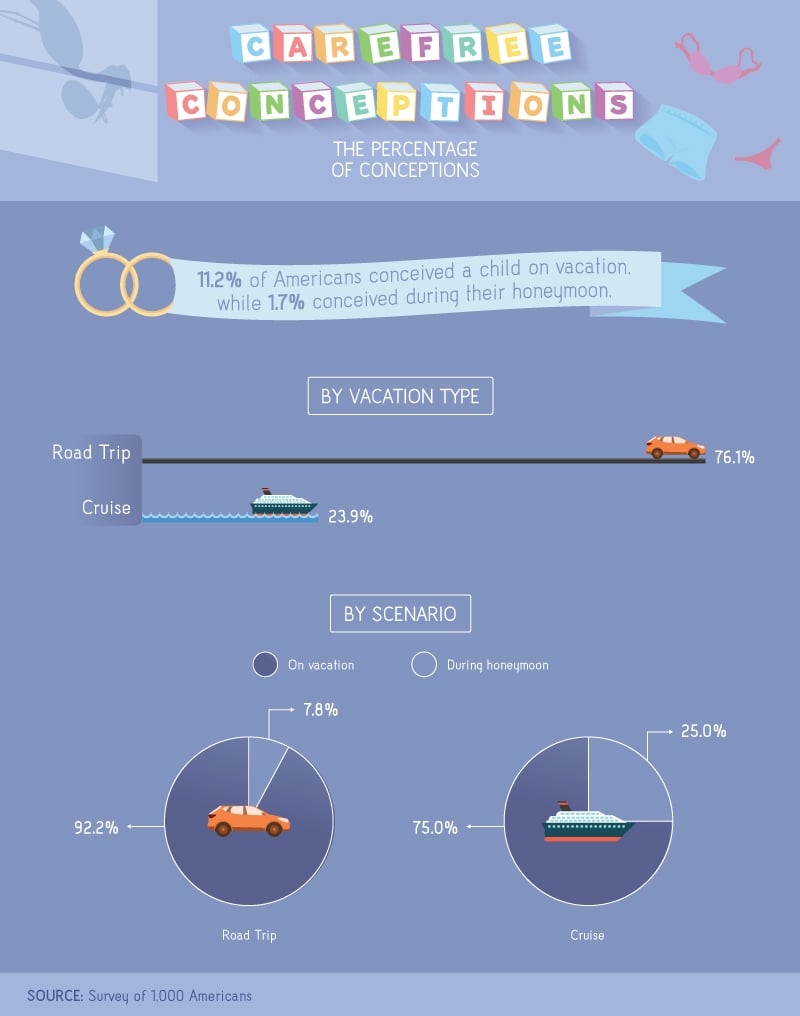 According to our findings, 11.2% of respondents experienced conception while on an excursion away from home. Additionally, nearly 2% of Americans reported wasting absolutely no time at all and conceiving on their honeymoon, granting their children exclusive access to the 'Honeymoon Baby' club.

We also found that most of these conceptions took place on a road trip of sorts (just over 76% compared to 23.9% on a cruise). We dove a little deeper and found out those couples who conceived during a vacation were more likely to be on a road trip (92.2%) than a cruise (75%).

So while a road trip was more prone to cause a baby-makin' breakout for newlyweds, most vacation-bound couples tended to conceive kids while on a cruise.

The Best Time of the Day for Conception 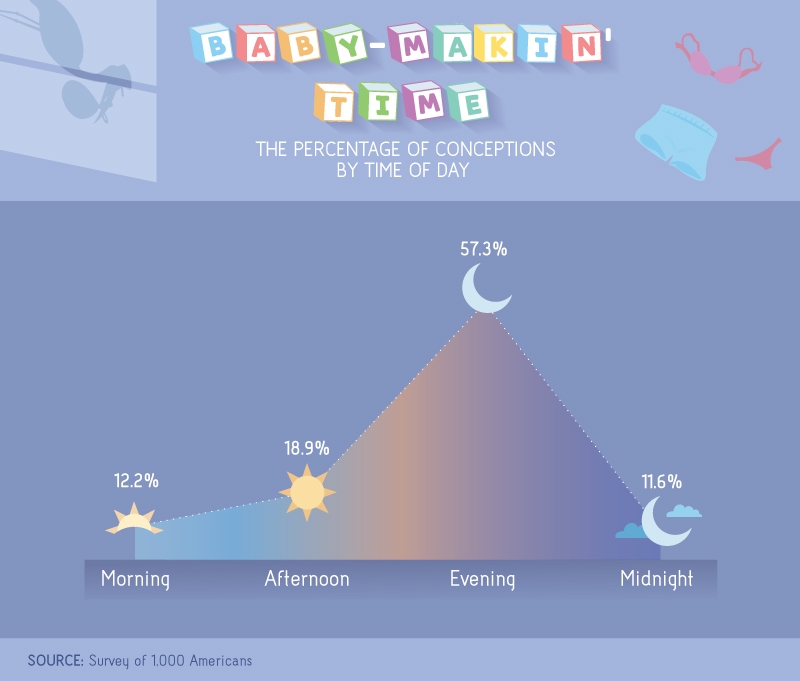 The evening is tops as far as time of day goes for conception. Apparently, this time of day brings forth romantic feelings – over 57% of respondents said they conceived their first child during the evening. As this time typically includes a lead up to slumber, it's not a huge stretch to think most people conceive babies at this time of the day.

The afternoon was the next most common time of the day to conceive a child (nearly 19%), followed by morning (more than 12%) and midnight (almost 12%). 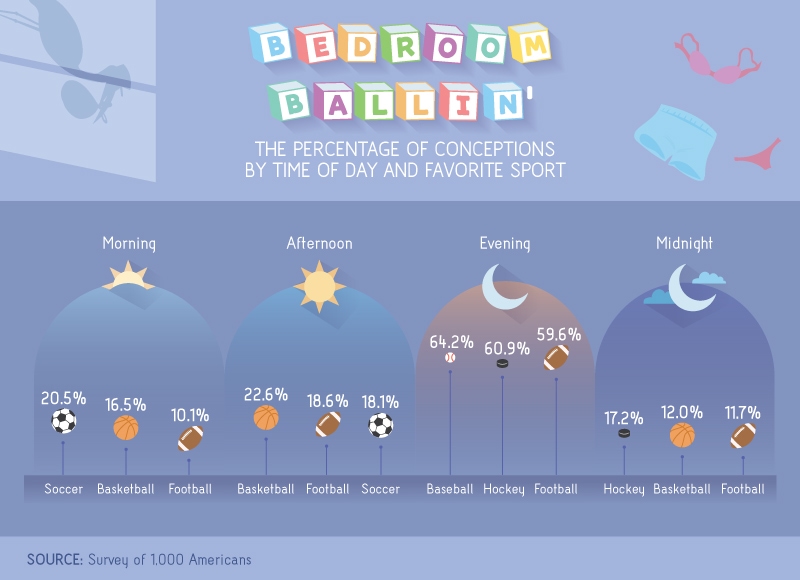 Overall, soccer fans were more likely to conceive a child in the morning hours. MLS games tend to take place in the afternoon and evening, so perhaps there's more couple time in the morning for these folks?

Baseball fans were more likely to conceive a child in the evening, possibly after the final out was called. While there are a few daytime games, most MLB games take place in the evening, so baseball fans may be staying up late to finish the game before a postgame celebration between the sheets.

Hockey fans were most prone to conceive children at midnight. NHL games also generally take place in the evening, and they generally don't run any longer than other professional sports – there are three 20-minute periods, and game times tend to run around two and a half hours total. Perhaps it's the cooling off period after a hockey match that keeps fans up half the night doing the deed?

As awkward as the results may sound, they're a reality for couples throughout the nation. If there's one thing you can take away from our findings, it's that Americans prefer making love from the comfort of their own bed. Whether you're a planned pregnancy or an unexpected holiday surprise, one thing is for certain – the odds of you knowing aren't exactly on your side.

For this study, we surveyed 1,000 Americans about the conception of their first child. To calculate the percentage of conceptions by holiday, we traced dates nine months back from each holiday and grouped all responses within a week's range. Premature births were collected and excluded from the results.

Find our conception correlations interesting? Don't worry about the odds of sharing this study – feel free to do so, as long as it's for noncommercial purposes. Before you get to baby-making, be sure to give credit where it's due by linking back to this page and credit OnlineGambling.ca for the work.