Bachelor & Bachelorette Parties - What Did You Do?

The last big night out before "the best day of your life" is always depicted as some wild, booze-filled ride. We surveyed over 1,000 people who are married, or have been married, to see what exactly went on during their bachelor or bachelorette parties. We broke it down by gender to see who thought the rules of monogamy should be flexed or followed at their respective parties - who stole a kiss and who did more? Continue reading to see what we found. 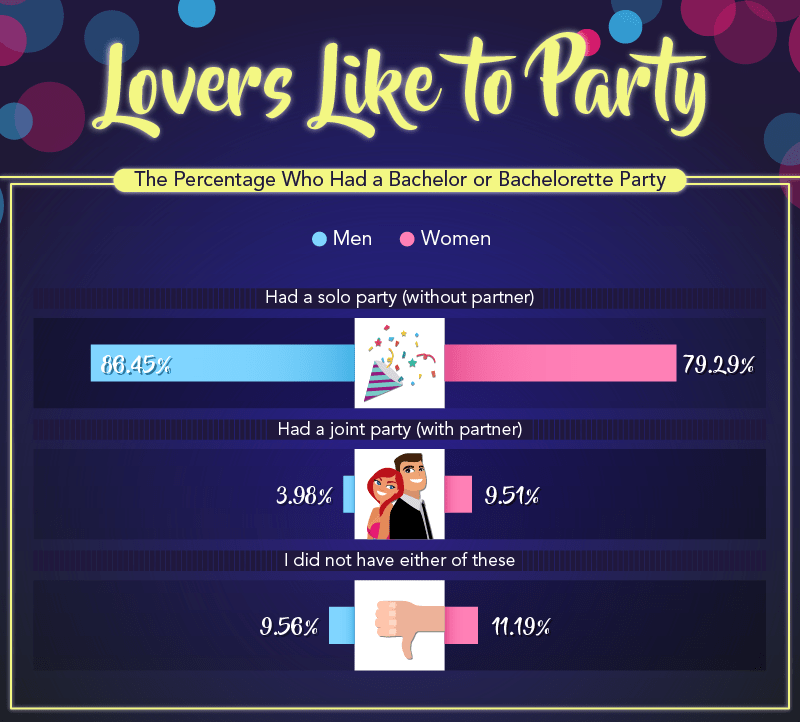 The majority of people decided to party away from the prying eyes of their partners. Roughly 80% of women and 86% of men had a solo party without their significant other in attendance. Only a small percentage of people said they had a joint party with their partner - less than 10% for men and women.

However, more than 11% of women and almost 10% of men reported they didn't indulge in any party before they said, "I do." 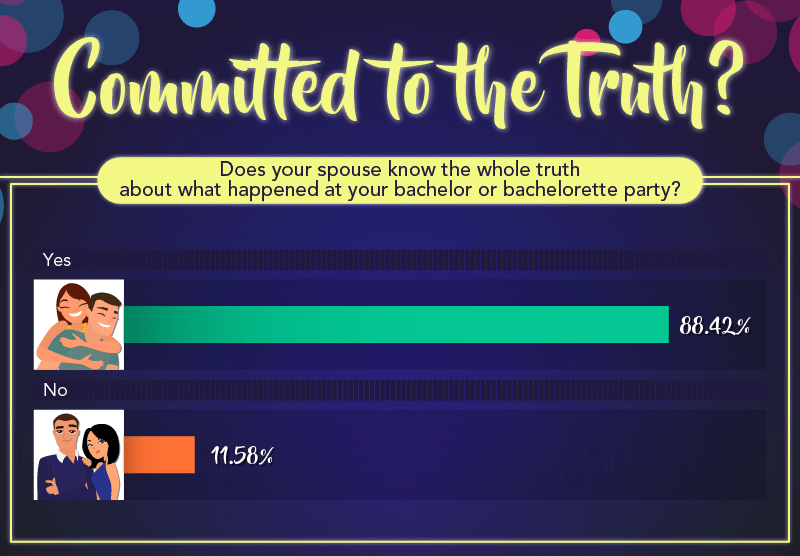 Of the people who did have a bachelor or bachelorette party, we asked who was truthful about what went down on the night in question. According to their responses, most people were honest with their spouses about what happened before the rings went on. However, nearly 12% of people said their spouses did not know the whole story.

Broken down by gender, women were more apt to be honest than men were. A whopping 93% of women responded they were truthful, compared to 83% of men who responded the same. Still, the numbers show the majority of people, despite the situation, were honest with their partners about what happened during their night out.

More than 1% of women kissed someone else, but only around 0.7% of men echoed the occurrence.

Both men and women assumed their spouse-to-be was more faithful than the survey shows they might have been. When it came to sex, 0.5% of men believed their betrothed had a tryst, and 0.3% of women thought the same of their other halves.

When it came to doing anything but intercourse, 0.8% of men and 0.4% of women thought their counterpart engaged in these acts; however, while only 0.2% of women actually did, just under 0.9% of men admitted to this transgression. 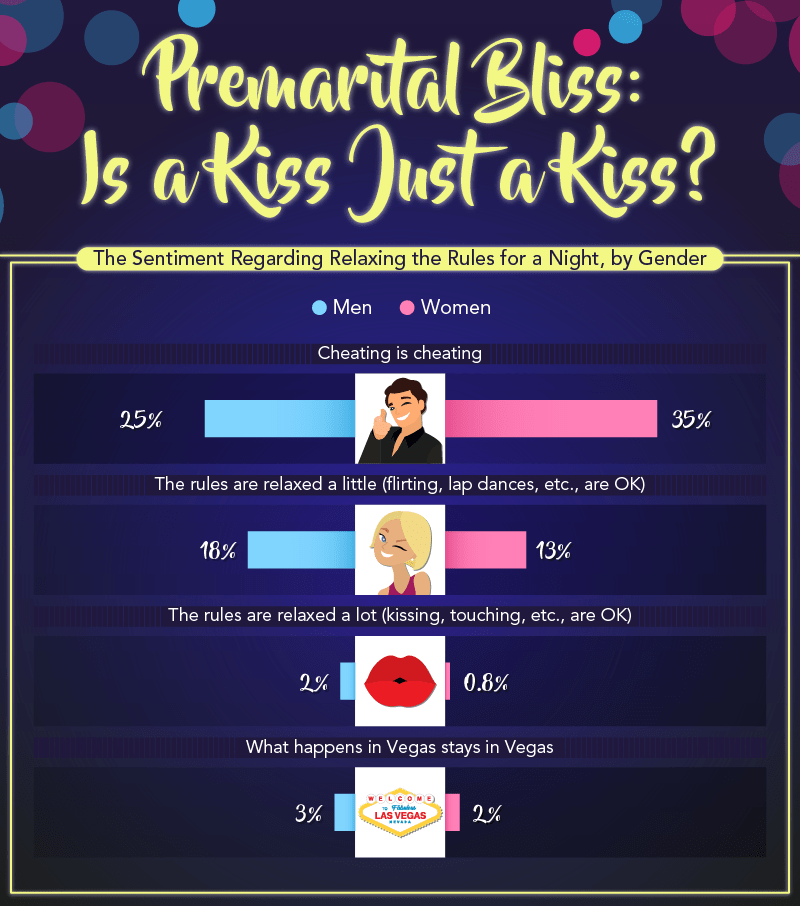 Do the rules change just because you're not married yet? According to 35% of women and 25% of men, the answer is no.

However, 31% of people believed there was room for the rules to bend a little bit.

Roughly 18% of men and 13% of women felt flirting, lap dances, and similar activities were all right. However, more people agreed with the statement "What happens in Vegas stays in Vegas" than agreed kissing and touching were all right. 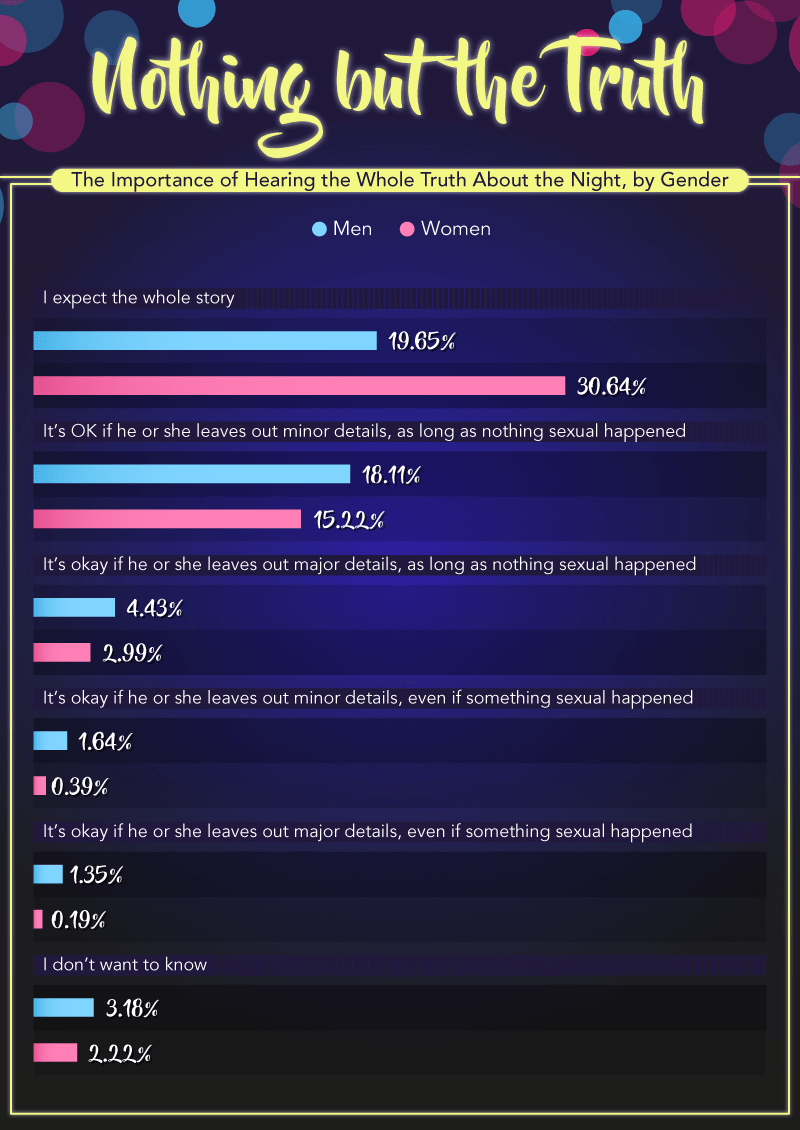 There's no question the party happened, but does your partner want to know? Or rather, how much do they want to know?

Some people didn't want to know at all - specifically 3.2% of men and 2.2% of women. However, most people wanted the whole truth and nothing but the truth. Women wanted to know it all, more than men did, with nearly 31% of women stating they wanted all the details, compared to 20% of men.

A meager 0.2% of women stated it was OK for their partners to leave out major details even if something sexual happened, but almost 1.4% of men didn't mind being spared the specifics.

The responses showed men were more accepting of not having the entire truth revealed of what happened during a bachelor or bachelorette party. 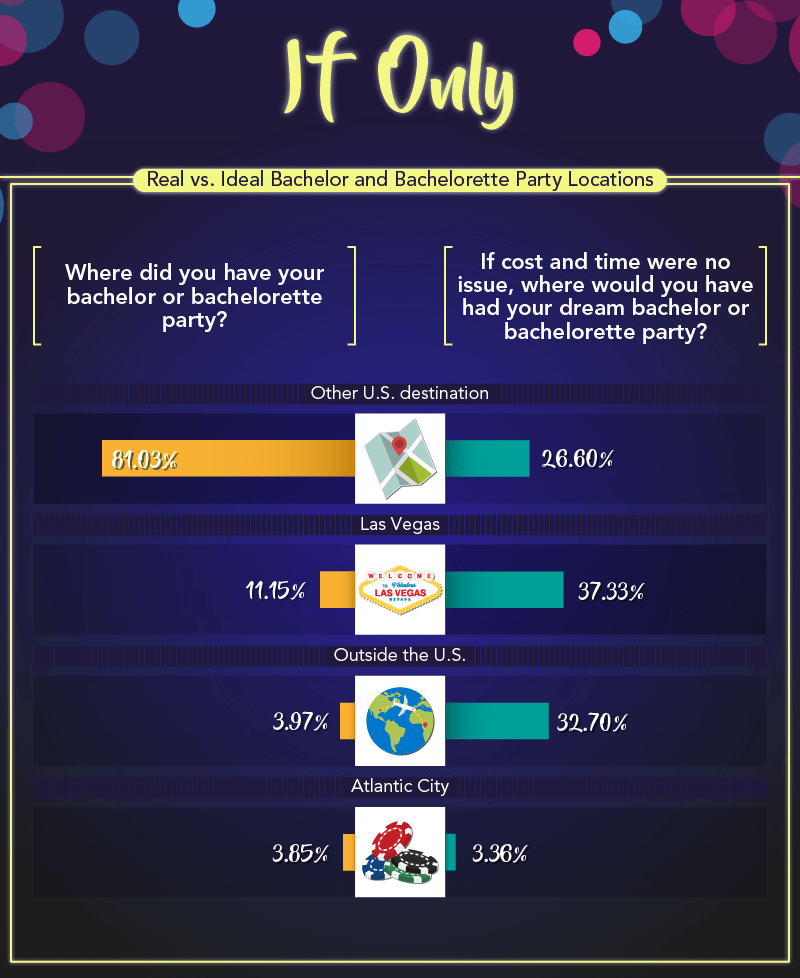 Should have, could have, would have! If money were no object, where would people have had their big night?

Only 11% of people had their parties in Las Vegas, but 37% of people said they would have gone there if money were no object.

Likewise, only 4% of people traveled outside of the U.S. to celebrate, but if they could have, almost a third would have.

As it turns out, bachelors and bachelorettes were far naughtier in Las Vegas compared to other places.

Between the two types of bachelor parties, Vegas and non-Vegas, almost 48% reported the bachelors did nothing sexual at non-Vegas parties, but that figure dwindled to 26% for Vegas-based soirees.

Similarly, for women, 60% of those participating in a bachelorette party somewhere other than Vegas stated the bachelorette didn't do anything sexual. However, that number was cut nearly in half to 33% for those who attended bachelorette parties in Vegas.

For both men and women, sexual intercourse was more prevalent in Vegas. For men not in Vegas, roughly 5% of people reported sex taking place, whereas 17% reported the same for bachelor parties in Vegas.

For women, 2% reported intercourse occurring outside of Vegas, but over 9% reported such activities while in Vegas.

Bachelor and bachelorette parties are a great way to celebrate the end of being single and moving into a new life with your partner, but some people are celebrating harder than others. Some want to know what others have been up to, and some really don't.

We've done the dirty work for our and surveyed 1,000 Americans who are either currently married, or have been married, to see what exactly they were up to during their celebrations, and whether they want to know what their significant other was up to. People who stayed out of Vegas, wished they were there, and those that were tended to stray on their big party night.

We surveyed over 1,000 currently or previously married Americans regarding their experiences with bachelor and bachelorette parties.

Feel free to share the content of this article for noncommercial use. All we ask is that you please provide a link back to this page for proper attribution.