Catching the Rarest Feats in Baseball

Professional baseball has been around for a long time – since the late 1800s – and while the game has certainly evolved over time, some things never change, including a desire to accomplish one of the game's rare feats.

We looked over baseball history to suss out some of the rarest events that can take place during a baseball game. We're talking no-hitters (the opposing team records no hits), hitting for the cycle (a single batter gets a single, double, triple, and a home run), immaculate innings (a pitcher only throws nine strikes – and zero balls – in a half inning), and the rarest feat of all – the elusive perfect game (No hits, no hit batsmen, no walks, no reaching on error) – which has only been accomplished by a handful of major league pitchers. As it turns out, three out of four of these rare events have actually been on the rise over the past 150 years of professional baseball, perhaps due to the expansion of the major leagues' teams as well as the length of the baseball season, which has gradually increased to 162 games per year.

Let's take a look at how these rarities have increased over time and which teams' fans have had the fortune of watching one of these priceless moments play out before them. 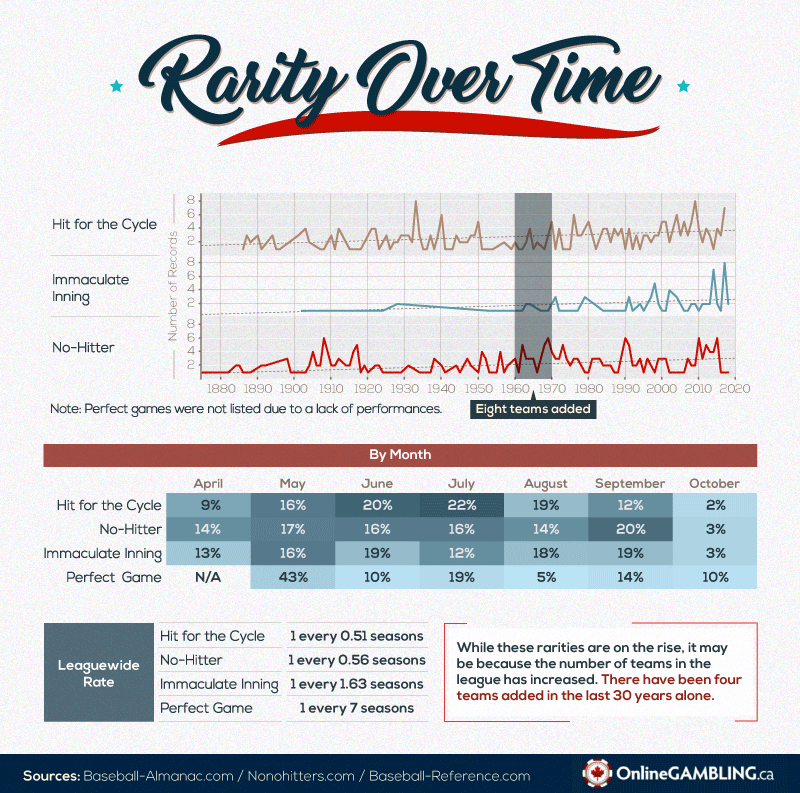 Looking over a typical season, hitting for the cycle is more likely to happen in the warmer months. This is likely no coincidence, as science says warmer temperatures and humid air can result in better hitting conditions. Everybody knows that as the weather warms up, so do the bats. The other baseball rarities have different months where they tend to peak. The perfect game is more likely to happen in May (perhaps because the pitchers are fresher), but a no-hitter is slightly more common in September (maybe the pitchers are cranking through a second wind and cooler temperatures).

Which Teams Rate the Highest? 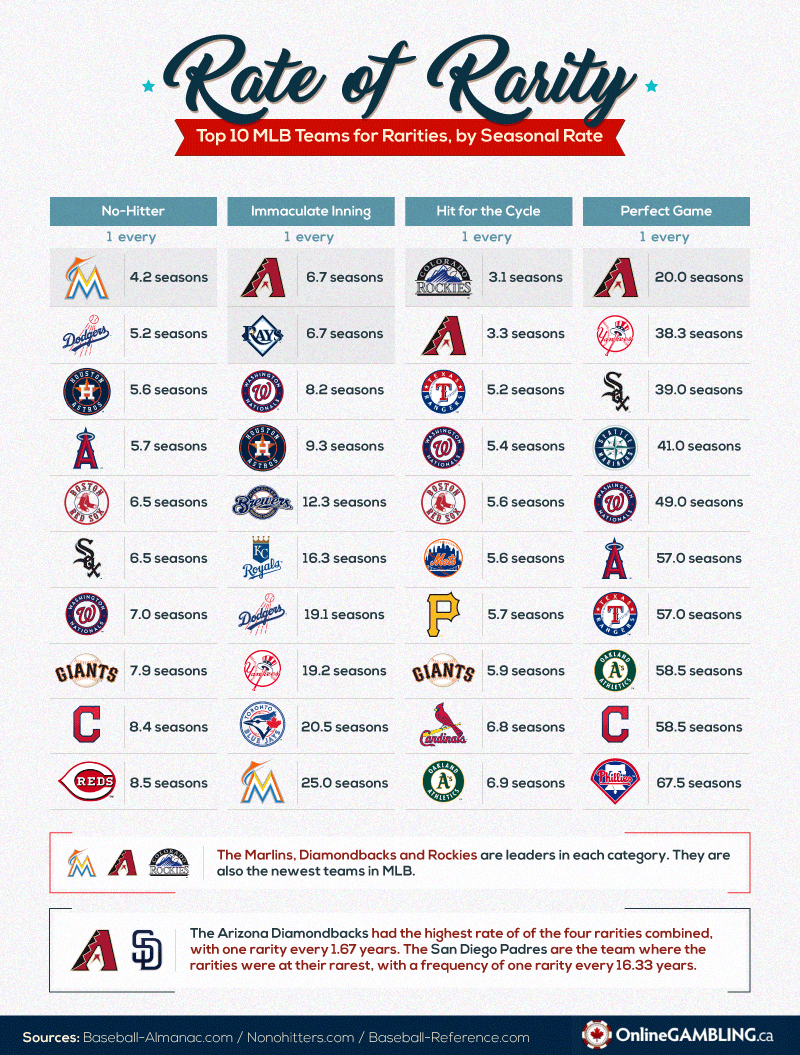 Next, we looked at the rates by team for each of these rarities. It looks like Miami Marlins pitchers are the most likely to throw a no-hitter, with a rate of one every 4.2 seasons. The Marlins are one of the MLB's newest teams, and they've had a solid handful of no-hitters, the last taking place in 2017 at the hands of pitcher Edinson Vólquez.

Hitting for the cycle is the most common rarity, and the Colorado Rockies have the highest rate of one every 3.1 seasons. Similarly, the Rockies are one of the newest MLB teams, having been established in 1993. Colorado also plays its home games at an elevation of 5,200 feet, which science notes will impact the distance balls will travel and can help their players get that home run needed for the cycle.

Our final category here is the perfect game, which we've noted before is one of the rarest feats in professional baseball. The team with the highest rate is the aforementioned Arizona Diamondbacks with a rate of one perfect game every 20 seasons. Since the D-backs are in their 21st season, that certainly impacts the rate positively. Their one perfect game was thrown by Randy Johnson in 2004.

It's not a huge shock that the leaders in each category are teams that are 20 to 25 years old. With a shorter time to accumulate stats (especially compared to the franchises that are over 100 years old), they can appear artificially inflated, similar to how a player's batting average can look out of this world if he has quality plate appearances over the first 20 games of a season. It is likely that these statistics will level out as the years go by.

At the other end of the spectrum, we find the San Diego Padres, who have the rarest rate of all – they have a rate of one rarity every 16.3 seasons.

Rarities in the 21st Century 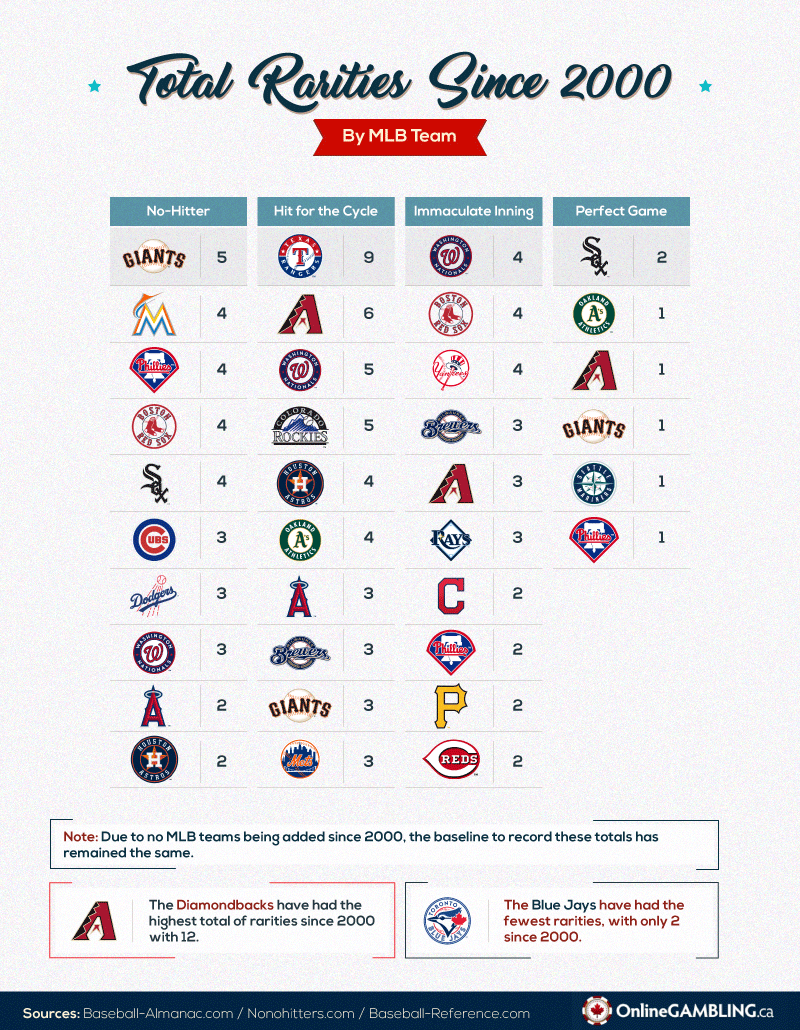 Since there haven't been any new expansion teams added to the majors since 2000, it will give us a better idea of rare feat rates if we just look at games since that date.

The San Francisco Giants lead the pack with the most no-hitters since 2000. While they have 17 in all of their long and storied history (the first was in 1891), they've notched five since 2000. Two of those were thrown by Tim Lincecum (2012 and 2013), and most recently, Chris Heston threw a gem in 2015 against the New York Mets at Citi Field.

The Texas Rangers have the most cycle hitters since 2000 with nine. Most recently, Carlos Gomez completed the feat in 2017 when he nailed it against the Los Angeles Angels. The power-hitting Adrián Beltré has also hit for the cycle, but he has done it twice, most recently in 2015.

Since 2000, the Washington Nationals have had the most immaculate innings. Most recently for the team, pitcher Max Scherzer nailed an immaculate inning in 2018 when he faced Tampa Bay, which was the second time he'd accomplished the feat.

As far as perfect games go, we already know they're few and far between. In fact, we only found one team that's dealt more than one perfect game since 2000 – the Chicago White Sox. In fact, their last two no-hitters were actually perfect games – Mark Buehrle in 2009 and Philip Humber in 2012. Interestingly, Buehrle's perfect game was his second no-hitter, the first coming in 2007 against the Rangers. 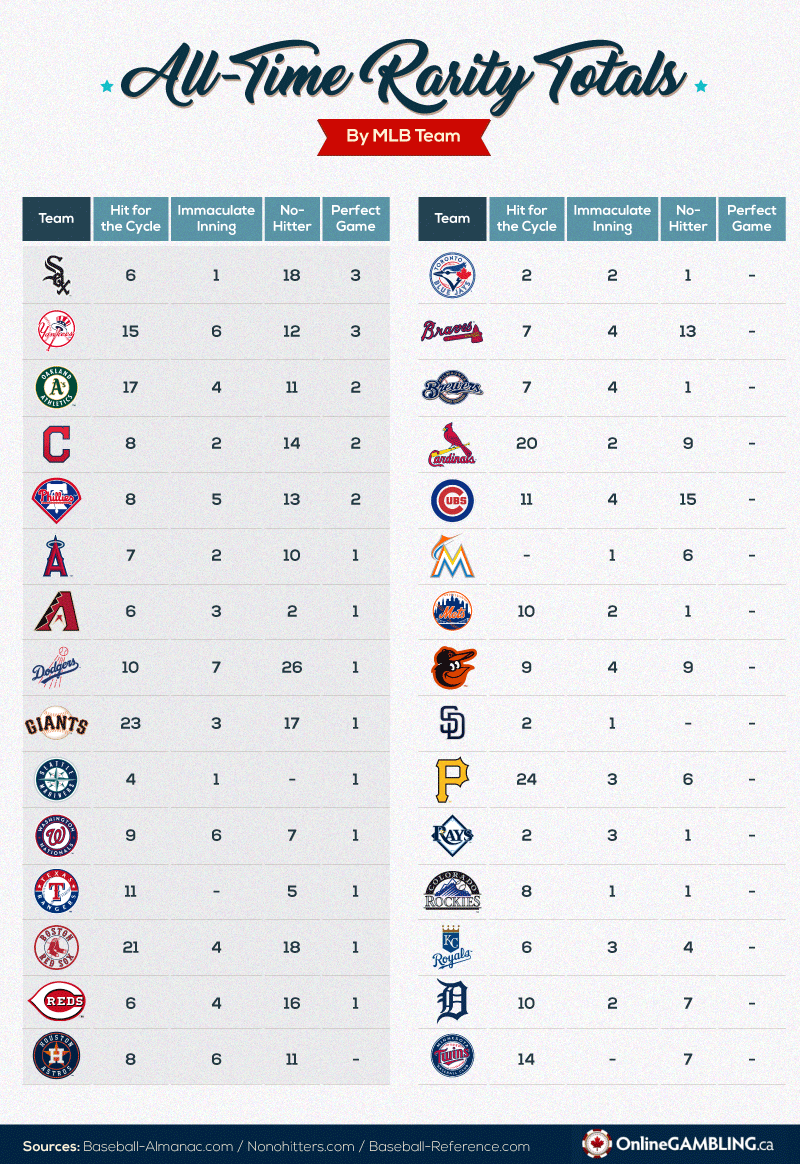 Now, we can take a look to see where every one of the 30 MLB teams falls on the spectrum. First, you'll notice that only about half of the teams (14) have even managed to enjoy a single perfect game, and only five have managed to do it more than once. The White Sox and the Yankees are the two franchises that have produced three perfect games.

The Pittsburgh Pirates are the team that has the most players who have hit for the cycle: 24. Most recently it was John Jaso to nail the feat in 2016, and he was the first to do so at the Pirates' new digs (opened in 2001). Jaso, incidentally, became the second player in MLB history to hit for the cycle and also catch a perfect game (he caught Felix Hernandez's perfecto in 2012 when he was with the Mariners).

Finally, the team with the most immaculate innings is the Dodgers with seven, most recently in 2017 off the hands of closer Kenley Jansen, who reportedly didn't know what an immaculate inning was before he tossed one.

Take Me Out to the Ball Game

If you're headed out to the ballpark hoping to see one of these rare (and often historical) events, well, it's going to be a good idea to not count on it. So many factors have to come into play for these rare feats to be accomplished, so if you are there when one happens, count yourself lucky.

We used data from baseball-reference.com, nonohitters.com, and baseball-almanac.com to determine the historical totals for every MLB team. Records consist of regular and season games. Totals for teams that no longer exist or use a different name were collected based on how they appeared in baseball-almanac.com's records. The yearly rate was calculated using this formula: 1/([Number of Records]/[Team Age]).

For the rate of rarity, multiple teams were tied with one perfect game. Because it is a list of the top 10, certain teams were omitted because they've been in the league longer and have had more opportunities to pitch a perfect game.

We did not have access to the total number of regular season and postseason games. This posed an issue because we could not calculate the average number of games that separate rarities from one another. A rate was used instead.

No-hitters, perfect games, and the other baseball feats mentioned in this article are rare, but the information doesn't need to be. If you found this information interesting, feel free to share it with your readers for any noncommercial use. All we ask in return is that you link back to this page so that readers can have access to our full analysis.